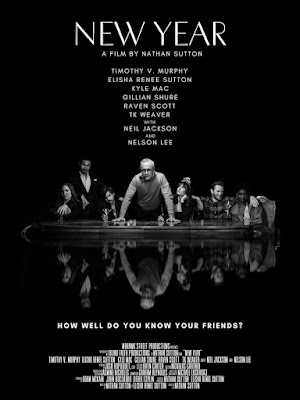 New Year is a black and white movie set on New Year’s Eve. It takes place at a party that an unhappily married couple are having at their house. The night ends when the host has the group play a game called “I Love You, I Hate You." where people share the negative truths about the person they're with.

The first hour of the movie is the group just sitting around talking about topics such as acting, celebrity, guns and vision boards. They dance, smoke, and do coke. The first hour was a snoozefest in my opinion. The conversations were extremely dull and I just didn't care about them at all.  The last 15 or so minutes of the movie is the "game" which is the only semi interesting part and it ends pretty abruptly.

This was one of the most boring movies I've ever seen. I don't know what the point of it was. Definitely a miss.

Email ThisBlogThis!Share to TwitterShare to FacebookShare to Pinterest
Labels: Ariela, drama, not worth the effort