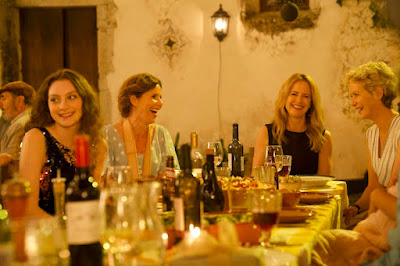 When  one of a close knit group of fifty something friends dies, she asks her remaining buddies to repeat a trip across Europe in order to see the disco ball of light, a twice a year event when the sun causes a ball of light to appear in a church in Italy. They have five days to travel from England to Italy with the deceased woman’s daughter in tow.

A good cast is kind of set a drift in  a film that is entertaining but kind of unremarkable. The problem here is the script which doesn’t really do much in the way of character building. We are firmly focused on the events as they transpire, but we really don’t get any sense of why they are friends or what happened in the past. That might have worked in film with a greater sense of suspense but in a film that is little more than a travelogue with great actresses it isn’t enough.

Don’t  get me wrong the film entertains. The ladies (Kelly Preston, Jenny Seagrove, Sally Phillips  and newcomer Elizabeth Dormer-Phillips) on screen are a formidable team, and the hold our attention even when not much is going on. I watched the film because I enjoyed hanging out with the ladies. Hell I even paused the film when I got up to grab a soda, but the reality is I probably could have let it run and not miss anything.

Worth a look in an undemanding mood.