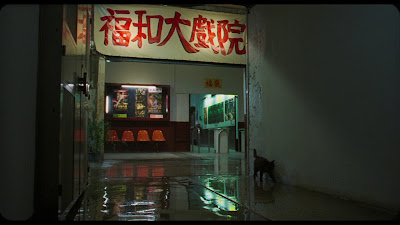 I am all over the place with the films of  Tsai Ming-liang. Some I like (YOUR  FACE) some I dislike (DAYS)  and some I’m mixed on (STRAY DOGS).  I know the feeling is shared by many of my film friends, all of whom will always dash out to see the latest film by the master simply because he is going to give us something approximating life in a way no one else is really doing.

The one film everyone seems to love is GOODBYE, DRAGON INN his classic  about a screening of the classic film DRAGON INN on a rainy night in a theater slated to close. While I won’t call it, as Apichatpong Weerasethakul has, the greatest film in the last 125 years, I do think it’s a very good film. With the film getting a run starting Friday at the Metrograph in New York I revisited the film for the first time in a decade or more

The film doesn’t have a plot as such, it’s simply people living. The ticket seller tries to give the projectionist a bun, a tourist tries to pick up some one up and people watch the film. Basically life happens.

I like that we just sort of fall into the film. I love how we effortlessly are placed into the theater and the events. From the opening moments when we are peaking out of curtains we are in the theater with these people. It’s a small trick that made me understand why I like this film more than some of the directors other films, and that our introduction to events is effortless.  He tricks us into thinking we are there. The camera set-ups and shot choices are always places where we could be. That always isn’t the case, especially  DAYS, which left me wondering why we are there. In GOODBYE I understand why, because we bought a ticket and we decided to wander the theater.

Watching the film I understand why the film clicks with so many. There is a not only a life to it but a genuine and real connection to our life through the way we are drawn into the action.

If you’ve never seen it, you should. If you have seen it see it again, especially if you are like me and revisiting it again for the first time in a long time.