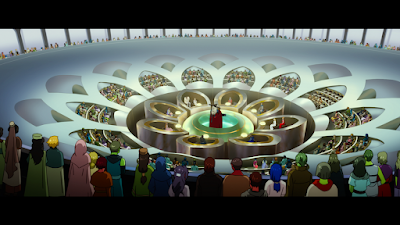 Long ago when Lord Elohim was on earth a dark force traveled across the universe to destroy him and the world.

This visually gorgeous film has stunning images and mind blowing sequences from start to finish. This is a film I would have loved to have seen on a big screen simply because it looks so good...

However the plot, the dialog and the songs are so gawd awful that this is easily one of the worst and silliest films of the year. I can't believe that adults made this thing.

The film is a weird riff on religion mashed with creatures from space. Names are all from the various religious texts, with a heavy reliance on Judeo-Christian myths and legends. Everything is declared as if it has some deep meaning. While the songs sound lovely the translations caused me to double over in pained laughter.

This is every bad anime cliché in one place. 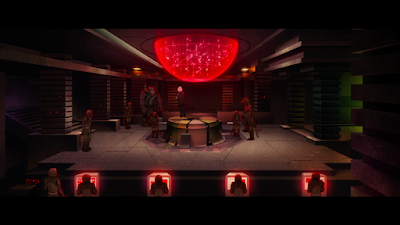 Email ThisBlogThis!Share to TwitterShare to FacebookShare to Pinterest
Labels: anime, mst3k material, not worth the effort