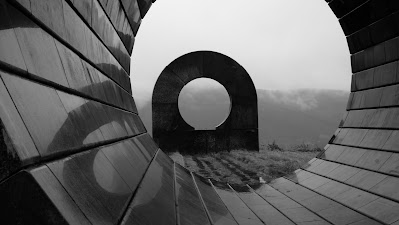 The feature debut and  work from composer Jóhann Jóhannsson is a work that demands to be seen as big as possible and preferably in a darkened theater where you can focus on the marriage of sound and image without distraction.  Part documentary, part science fiction film (its based on a scifi novel by laf Stapledon) and part essay the film is a mediation on life death and the things that remain.

This is a late in the year stunner.  This is a film you watch and engage with, falling into it and another time and place. The film is a series of black and white images of long decaying brutalist art and architecture from Eastern Europe over which we hear Jóhannsson’s music and Tilda’s Swinton’s narration about the last men alive. It’s a hypnotic experience that left me staring at the screen unmoving as the last image faded.

I really liked this film a great deal. It’s a film that I’ve been mulling over since I saw it. I keep wanting to go back and rewatch it before I write on it but finding that in the crush of late year films have prevented it… which I’m fine with it since will force me back to the theater to see it properly.