A Story of Christmas Eve Part 2

This is the second Christmas story of the day. It’s what was happening at the Bully Building while the first story was happening.  If you read the first one and liked it you may like this one. If you hated it stop now just move on this is more of the same. Remember  this was written for friends and intended to pretty much amuse them. Randi, Eden, Nate, Hubert, John, Liz, Shelly and Bully are contributors to Unseen. Pink Bunny is a friend from online who posts to twitter as a bunny, Kitty Pryde is John and Randi’s cat. Marshall is Bully’s little sister and the bears ect are plushies that live with John and Randi.

A word of warning the stories do not tie into each other perfectly. They are meant to be two views of insanity from two points of view.

If you enjoy it great, if not move on and reviews will be back tomorrow. 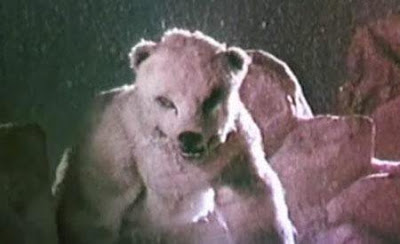 John had come up with the idea of a guys night in to counter balance the girls night out that Shelly, pink Bunny, Eden, Randi, Liz, and Kitty Pryde had planned at the all night Santa Tango down  at the Nighthawk. It was going to be Bully John, the Bears, the shark and some of the other plushies hanging out.  The idea was that everyone would hang out, tell bad jokes while they sip cherry wine, pretend to smoke chocolate cigars and do guy things. Instead of the Four Yorkshiremen it would be the ten Brooklynmen.

To round things out  John had invited a few others but everyone seemed to be busy. Hubert was on the other coast on a super-secret spy mission that no one was supposed to know about involving Northern Canadians trying to tunnel into the US via the north pole using tenacled creatures from another dimension. Nate declined because he was going to be leading Christmas service in the Chuck Jones Home for Reprobate Cartoon Characters.  As for Steve he wussed out because he didn’t want to be in Brooklyn, where the monsters live, after dark.

The whole "boys will be boys" telling lies  as they drank pretend Chateau de Chassilier went down the tubes when Shelly caught wind of the impending testosterone fueled evening and asked Marshal to stay home and keep things in check. It wasn’t that Marshal wasn’t capable of being an active participant to any insanity, she did love her heavy weapons after all, but Shelly felt her presence would just tone things down.

Marshal could feel the air leave the room when it announced she was staying home. However she didn’t mind because she had a few idea of her own to spice up the night. Marshal always had ideas, it was what made her so charming, and actually more dangerous than her brother Bully. She was the crazy one in the family, she just kept it inside  an put forward the thought she was a sweet little girl

Which was why as soon as the ladies had left the building Marshall hit all the guys with whip cream pies. All bets were off and a major tussle resulted. Some how in the middle of it the Christmas tree got knocked over and and john ended up tied up in Christmas tree lights.  The bears saw this and decided that they would sacrifice John to Magumba and started to set up an alter to the  god of the Dickies.

Things were rapidly spiraling out of control which confused Bully to no end.

Marshall leapt up on the altar and shouted “Before we make a sacrifice we must dine on HoHo’s and YooHoo!”

John was even more confused and simply tried to say “Wait what?”  as he tried to figure out what in the hell had just happened.

“To the Bodega!” shouted Marshall. Everyone put on their coats and headed out the door, John still wrapped up in the tree lights, a living hopping Christmas tree.

It was at this point three things happened at exactly the same time.

First the door to the house slammed shut just as Marshall realized no one had taken the keys.

And lastly the monsters showed up – thus proving Steve was correct. (Though to be perfectly honest a great deal of discussion has gone into the matter of whether the monsters would have shown up if Steve wasn’t writing the story. Bully has speculated that this whole incident was wildly inflated by Steve because the fact that everyone stayed home watching RiffTrax, MST3k and the Mads and drinking hot cocoa and falling asleep, missing Santa and being woken up by a phone call about pancakes would have made a non-story. His attitude was he was perfectly fine with the monsters showing up in this version since the chicks dig it)

“OH MY GOD THEY HAVE NEIL” shouted Marshall as one of the beasties grabbed the English author and carried him off.

“Wait what?” Said John again as he desperately tried to parse out when Neil had entered the story.

Marshall debated pulling out her pocket pistol but knew that doing so was going to get them in trouble. If Randi heard gunfire as she was walking to the theater she would come home and ground Marshall because she was supposed to be calming things down, not escalating them into a firefight.

Springing into action Marshall ran over to john and climbed up to the top of his head.  John was completely confused by this but Marshall didn’t have time to explain. She pulled out her police whistle and blew it long and loud.

The conflict between plushies and monsters ceased as everyone looked to see what was going on.

“knock it off!” she screamed. “this is Christmas eve not a wrestling match”

Everyone took a step back and looked at the tiny stuffed bull.

“What if Santa saw you?”

A murmur of shoot ran through the collective crowd. It was followed by a round of apologies and recriminations and hugs as everyone asked for forgiveness. (Well not everyone, the one monster who carried Neil off was still missing- it was later discovered that Neil was forced to sign copies of every book in every edition  he ever wrong by the monster who was a superfan)

“I suspect that you guys are up for some boardgames and ice cream as we wait for Santa” said Marshall.

The monsters said they were.

“Good” said the bull in charge.”Now hel us figure out how to get back into the Bully Building.

One of the bears, nick named Captain Obvious, asked if they were sure the door was locked. Marshall turned the knob to show it was.

It was at this point that one of the monsters dressed on long brown robes stepped up and said “A Jedi does not need a key”. The other monsters began to groan as Luke tried to use the Force on the door.  When that didn’t work he had to be pulled away as he began kicking the door screaming “A JEDI WILL NOT BE DENIED!” and “OPEN DAMN YOU”

Dave, one of the uglier monsters leaned down and apologized to the plushies “Sorry, he gets in a mood…. And he’s seen Star Wars a couple times too many”

“Haven’t we all" said Bully.

Morty, one of the bigger monsters came over and joined the conversation “what if I pick up the building and shake it, maybe the keys will fall out a window.”

‘I could if I was really really careful”

“I don’t think it will work. Its just one of the things that just can’t be fixed.”

And with that Luke attacked Dave and they started rolling down the block banging into parked cars.

Mrs Lynsky opened up her window and started screaming “Will you monsters be quiet – I just got my kids asleep and Santa’s coming.”

Dave and Luke stopped fighting and sheepishly slinked back up the street.

Outside the Bully building things were getting interesting as several of the neighbors were getting involved with trying to pick the lock. Several near fights almost broke out as several factions debated rather heatedly, the best way to open the door.

Into the commotion Peppa Pig road up on Fat Pony.

Peppa and Pony were confused by the commotion going on around them. When they got to the stairs  she walked up the stairs saying “excuse me” as she went. She then took out her key and opened the door and she and pony walked into the building letting the door close behind her.

The street went dead silent as everyone stared at the door for a good long while.

Marshall continued to stare as she took out he cellphone and called Peppa.

“Could you open the door please?”

A few moments later Peppa opened the door  and everyone, John and Bull and the boys, and the monsters and the neighbors all piled in to the Bully Building.

John and bully started to pull the ice cream and fixings out of the fridge and cabinets while Marshal and Peppa took Fat Pony to get more ice cream and stuff, because there were a lot of people and monsters and everyone wanted some.

As everyone worked on Sundays the bears took out the big screen  and set up the projector. They were going to have everyone watch Cinema Titanic’s Santa Claus Conquers the Martians. Santa, who had some how slipped in when no one was looking said that he approved as he curled up off to one side to watch the show.

Bully took the two remaining bowls around to make sure that Neil and the monster who kidnapped him got some ice cream, but seeing that they were no where around quietly slipped one Sunday in his bowl and the other into John’s because that’s what best friends do.

“I won’t,Thank you” said John

And with that one of the bears hit the button and everyone got lost watching a holiday classic.

Email ThisBlogThis!Share to TwitterShare to FacebookShare to Pinterest
Labels: not a movie