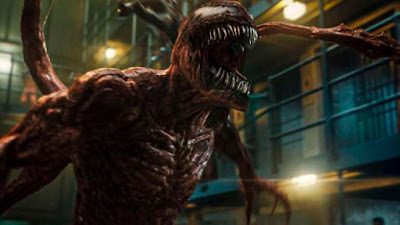 When the run time for Venom Let There Be Carnage was announced I was certain there was either a mistake or the film was going to suck. How could a big huge comic book film run 90 minutes? I was doubly wrong,, it is 90ish minutes ad it kicks serious ass.

The film has Venom and Eddie bickering. Venom wants brains and Eddie wants to remain low key. Things get complicated when Cledius Cassidey  demands to see Eddie. He’s hoping to get a message to his lost love. It all goes sideways and Cassidey gets infected with his own symboite.  Cledius and Carnage breakout from prison and goes off to find his lost love. Meanwhile Venom and Eddie have separated and both are miserable. Can they get back together?

A wickedly funny action comedy this movie just goes. The film assumes you’ve seen the first film because outside of cassidey, screech and the cop annoying eddie there is no character explanation. People are. There is a development of course as all the characters arc- even the doctor engaged to eddie’s ex arcs and becomes someone we like (hell even Venom does). By assuming you know what the hell went before the film can just move and be and the result is one of the best Marvel related films. Outside of the post credit sequence, the film doesn’t have to be anything other than it’s own thing and as a result this film works beautifully. It scares me to think what will happen when the film folds into the rest of the MCU.

I love the interplay and the one liners. Venom’s running commentary when Eddie’s ex truly dumps him was similar to what happened in my head when I got dumped.

In all honesty I don’t know how this ended up as a PG13 film because it is violent and gory in cartoony way, but it works.

Highly recommended- Venom Let there be Carnage is one of the great surprises of the year.