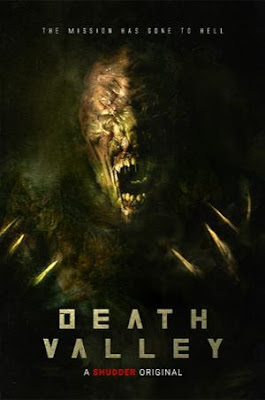 A specialized team of mercenaries are sent to  secret bunker to rescue a scientist and get the information on the project that they were working on. Unfortunately the reason for the rescue was something horrible was loose inside that begins to hnt them.

Written and directed by Matthew Ninaber (PG: Psycho Goreman), DEATH VALLEY is a good little scifi action horror film. While it could have been a little tighter the film still hits enough of the right notes to keep us watching and keep us interested.

If there is any real problem with the film is that it doesn't really do anything new. It's a film that while doing everything you expect, disappoints because it doesn't go out side of that. Yes, it entertains, but it doesn't do more than that, and its good enough that you really wish it would. That is especially important since over the last year or so there have been several films such as SUPER DEEP, which covered the same territory to better effect.

Quibbles aside this is a film that's worth a look.