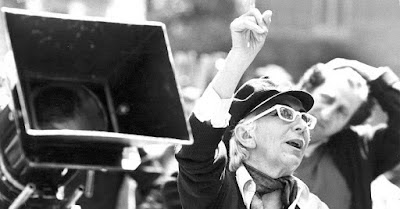 Lina Wertmuller died this week and the world is diminished.

While Film Twitter noted her passing, I still don’t think most of them knew who she was or how she rattled the pillars of heaven. I mean she literally was one of the biggest directors in the world spoken of in the same hushed tones as Ingmar Bergman.  But a failed dailance with Hollywood and a couple of weak choices of projects had her pushed aside. Never mind she was still making interesting  and very good films.

What kills me is that several film critics who should know better, and who hold themselves out to be the grand arbiter of things cinema (and in one case feminist cinema) knew nothing of her work.  These bananas retweeted the obituary but they had no words of their own because they didn’t know who she was, how she changed cinema or what her films are.

If you want my thoughts on Wertmuller go read my into for the Quad’s retrospective in 2017 which can be found here.

Michael Nesmith died on Friday and so did a chunk of my childhood. He was my favorite Monkee but he was soooooo much more than a guy in a prepackaged band.

Nesmith was a business man whose Pacific Arts helped shaped music as we know it. His videos changed the world. His Elephant Parts won the first Grammy for a music video. He produced numerous films, most notably REPOMAN which gave us Alex Cox and a whole esthetic.

As much as I loved the Monkees I never wanted to see them in concert but I wanted to see Nesmith. It took me decades but I did finally saw him in a small place in Bay Shore Long Island from the second or third row. And while his version of Rio wasn’t exactly what I wanted the rest of the evening was.

My heart is broken.

He will be missed. 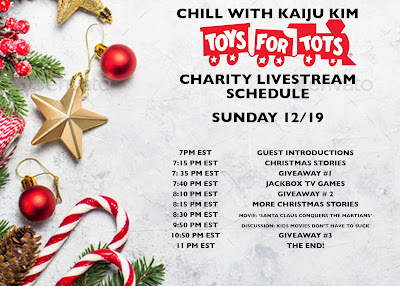 Good friend and Unseen's resident kaiju expert Kaiju Kim  is doing a streaming even on her You Tube Channel next week for Toys for Tots.

If you don't know Kim every week she has friends come on to talk giant monsters and just about life. Next week she will be doing that plus playing games, plus doing give aways plus watching SANTA CLAUS CONQUEERS THE MARTIANS plus having surprises.

The schedule is above and the channel is here. Watch and give.

(Or if you want to give and not watch go here)

I had wanted to go since Brookly Academy of Music is four blocks from Spike's offices and the Lee's lived in and around the neighborhood so it would be a home coming and anything could happen.

There was some talk of making films, mostly Malcom X and She's Gotta Have it, but larely it was talking about family and growing up. It was wonderful evening if you didn't expect all movie talk. I didn't and enjoyed the hell out of it.

If there was anything really wrong it was Spike let the guy in the second row from high school ramble on a bit too much since it was clear they did know each other but traveled in different circles (and he was pushing is own memoir).

Thankfully Spike pulled it back with the talk of his friend who financed She's Gotta Have It with insurance money.

I hope that BAM puts it up on their site because Spike says some great things about anyone wanting to make a movie- Find a group of like minded people and form a film gang and just do it. as well as some other gems on other subjects.

It was good stuff on stage and after great conversation with Ben as we missed trains talking.

In other BC Wallin has started sending out newsletters so if you haven't signed up go here and do so.

I am credentialed for virtual Sundance so look for coverage.

I’ve also put for Slamdance so look for reviews  from both at the end of next month.

Yes I will have a review of Jim Korkis' final VAULT OF WALT book - I just may miss the self imposed December deadline- I just received it in the mail.

My original plan for this piece was to talk about the plan for the  end of year awards but I don't think it's happening this year in any form.

Last year because of Covid I ran a list of the films that mad us happiest over the year and then what happened was we ended up giving an award to Trace Beaulieu and Frank Conniff because their MADS  movie riffing seemed to be the thing keeping everyone sane.

This year with viewing still frgmented I was going to do the same thing but life has gotten in the way. I could do the announcement and I could get the post up  but I can't do the work of chasing people down  and sending out emails and such. It's a lot of work requiting time I don't have or need to spend on staying away from the web site.

That said if any of you have awards you think should be handed out send me an email or DM me on twitter and I'll see about putting something together.