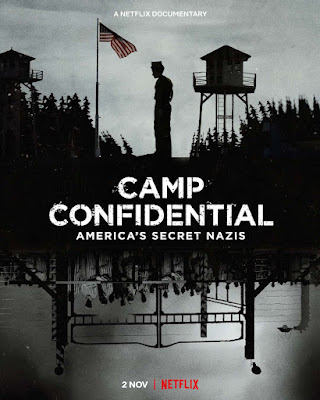 Animated documentary looking at the men who were stationed at the prisoner of war camp known only as PO Box 1142. The camp was staffed by German emigres who fled the Nazi's and joined the American Army. Their job was to befriend and interrigate that Nazi officers  brought their to get information about the German war effort,such as their rocket program. Later they were tasked to play nice with the German scientists brought over after the war.

CAMP CONFIDENTIAL fills in the the details about how America handled Nazi POWs of high rank. While there have been many stories about the regular soldiers brought to the US to sit out the war, we never really hear about what happened to the officers or how they were treated or questioned.

More importantly the film  makes it clear that the ne American soldiers tasked with getting information from the officers or keeping the scientists happy, hated the job. They didn't want to play nice with their charges and took some glee in giving them mental hot foots in orfer to get the information they needed.

While I think this is a very good film and worth a look on Netflix, I'm not certain that it will get the Oscar nomination that Netflix is angling for.