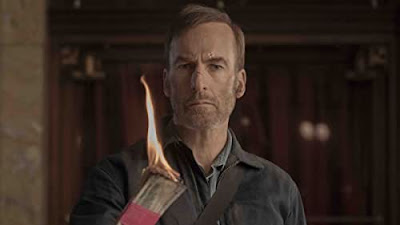 Bob Odenkirk plays a man going through his dull routine running a manufacuring plant. Life is the same every day, with his wife tolerating him and his kids thinking he's kind of a wuss. When prowlers break into his house he lets them get away when they threaten his son. His son isn't pleased and thinks he should have fought back. Feeling the need to get a cat bracelet back Odenkirk tries to track down the robbers based upon the tattoo he saw during the skuffle. He gets the watch back but not the braclet and while on the bus home it is taken over by a bunch of rowdy Russians. Needing to release his rage he beats them into the hospital and wanders off. Unfortnately one of the men is a crazed mob boss who wants revenge. This starts a war and it is revealed that Odenkirk's character is a former opertive specializing in wiping out problems the  government wants to disappear.

Some of the best sequences in any film of any sort this year are linked with some kind of bland bits. The set up of the film is glorious. The action sequences are magnificent, the charaters are wonderful. the problem is the film doesn't move fast enough in the linking bits. Its as if they turn ff the excitment as they move the pieces arond. It's not bad but I found I wanted to zip through the film to get to the next great bit.

The characters are great. Odenkirk nails both the dull guy and the man of action. RZA is kick ass as Odenkirk's brother. And who ever thought to finally make Christopher Lloyd an action hero firing guns needs to get an Oscar. Why have we been denied this all these years. I love that  the bad guys are BAD. I also love that the film gives time to build the secondary characters such as Odenkirks wife and boss, and even the minor thugs.

The action is bone crushing. You will audibly reactto much or if. And people stay hurt and bloody. Teeth are broken and people want to go to the hospital. Wounds carry over.  Its a wonderful change of pace from the "I ain't got time to bleed" nonsense.

Honestly I want a sequel.

If you love action films this is a must.