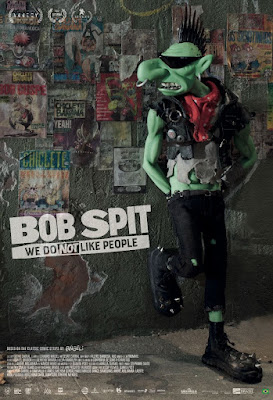 BOB SPIT is not going to be for everyone.  It’s an animated punk rock documentary sci fi road film biography about Brazilian cartoonist Angeli. Angeli is being interviewed by a film crew and is having a crisis. He can’t work.  This has stranded his creations in a desert wasteland. They, and Spit in particular aren’t happy about this and set off on a road trip to get to the bottom of it all.

I don’t know where to begin. Nominally a stop motion film it also brings  in other styles of the art form. It’s a visual delight that is constantly surprising us at every turn. It’s as if director Cesar Cabral decided that the film was going to animated and then he decided to push it to the limit and in any and every direction as needed. The result is a film that is a technical masterpiece of the animated art form. This is one of the most amazing pieces of moving art I have ever seen.

The film itself is a punk rock tone poem. A visceral in your face delight that puts you in a place an drags you along. You don’t get to know Angeli’s work as you crawl into his headspace. This is film where we wander in the place inside someone else’s head and see what’s living there. I may not know the where and when of his works and the people in his life but I feel as though I know the soul of his man and the soul of his work. It’s a unique feeling to get from a film and frankly I don’t think I’ve ever gotten that before.

Being a punk film it is not for all tastes. Its rough and raw and vulgar. Consider that Angeli has gotten into trouble for making "sick" dead dog jokes and realize that this same bent perspective is on view in the film. Yea, some people are going to be offended but they are ones who wouldn’t find Angeli’s work funny or worth the time. It’s a film that is probably going to rub everyone the wrong way somewhere along the way, which is fine by me. Films shouldn't make us comfortable all the time, even when they delight us.

I honestly don’t know what I wholly think of the film, some of it doesn’t work for me. At the same time I know a masterpiece when I see it. I know this is a singular piece of art that is operating on numerous levels at the same time. This is glorious filmmaking. 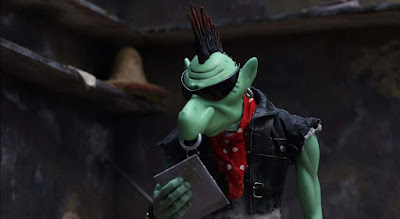