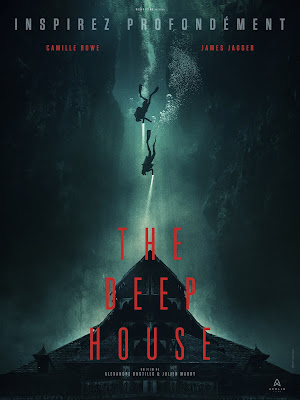 Two YouTubers who explore forgotten places travel, to France to see a town that was cvered by a flood years before.  They are disappointed to find it a tourist trap and in ruins. A tells them he knows a perfectly preserved house in a hidden part of the lake... stupidly they go off the beaten trail and end up ay over their head.

Essentially  a real time story of an underwater haunted house DEEP HOUSE grabs are attention and pulls us along.The pair only have so much air and once they get in they have to struggle to get out...not to mention to stay calm since heavy breathing shortens their air supply.

From a technical pint you are going to want to know how the hell they did this. Most of the film is underwater so filming must have been difficult. I would love to see a making of piece on the film because for once here is a film where it's not all CGI and green screen. The film is also full of stunning images and the directors know how to use the blackness of the water to create claustriphobia and

If there is anything wrong with the film it's that the film doesn't quite stick the landing. For a film that seems truly fresh and new (even if it's window dressing) the ending disappoints. Its not that it's bad but more that it comes off as kind of cliche. (And we don't need the end credit scene).

Quibble aside there is so much gd here there is no way I can not recommend this film. Its pretty much a stunner.