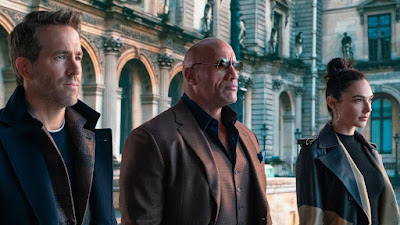 Globetrotting caper film pits Dwayne Johnson against Ryan Reynolds against Gal Gadot in grand but emotionally empty cops and robbers caper film.
This film felt emotionally dead to me. the three leads seem to walking though a film that doesn't do anything new but simply recycles bits from the stars earlier films. Its so bad that I don't think the film needed a director since every one on screen has done this sort of thing so many times there was nothing they would need to be directed to do. If you ant to see how bore they are watch Dwayne John in this film and then look at his work in the brief clips we've seen of his BLACK ADAM passion project.
The film might have been able to get away with it if the action sequences had been snappy but they aren't. They are by the numbers to the point they feel like a low level Lifetime cable film with boring explosions.
I tuned out early.
RED NOTICE is the new definition of a paycheck job.
Posted by Steve Kopian at December 04, 2021