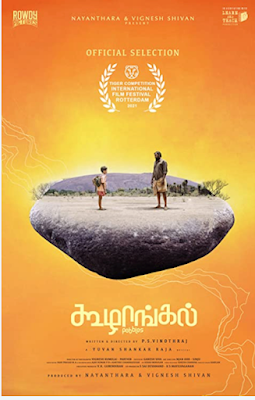 India’s Oscar submission is the story of an abusive father who goes to pick up his wife after she wa beaten the night before. Taking his son in tow he goes to retrieve her at the end of a long bus ride but finds she has returned  home already.  The son is pissed at his father’s behavior tears up the  bus far home and they are forced to walk back.

Mannered and deliberate film is not for all audiences. If you want a fast moving film that moves like the wind and has snappy dialog this isn’t for you. This is a film that is very intentionally focused on life as it is lived in a part of India. It’s a film that is focused on the cycle of abuse and poverty that many people are caught up in.  It is a film that requires our attention and focus.

I liked this film but I didn’t love it. My primary problem is that the father is a rather hateful person. While we know why the way he is we still don’t want to spend time with him. That said the performance by Karuththadaiyaan is masterful as we watch him try to cope and figure out what to do about life and himself. It’s a performance that is almost entirely all physical movements and it’s a masterclass in how to act on screen and have it seem real.

If you like mannered and deliberate film this one is for you.