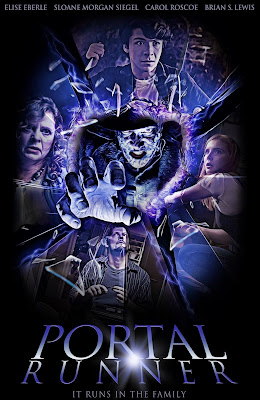 15-year-old Nolan discovers the ability to travel via portals to parallel worlds but things become complicated when he ends up chased by an evil force. He ends up stranded in an alternate world where he has an older sister. He is then forced to fight to protect a family that isn’t quite his own.

I was not going to cover this “family” film because I have been running across way too many mediocre family films the last few months. However I took a look at the trailer and it looked pretty good so I thought to give it a try. I’m glad a did because PORTAL RUNNER is pretty good.

While the film could be a little less family friendly in order to make things a bit more tense, it still is suspenseful. It’s moves like the wind and it drags us along from the first frame to the last . While the film does it some things we’ve seen before, there is enough different that we are carried along.

If I have any real quibble with the film, it’s that it’s too short.  Padded end credits aside the film only runs just over an hour and while that results in a brisk pace, the film could have used some character expansion. I’d like to have seen a bit more. That’s not to be seen a negative but a positive since it means that I had a good time with these characters.