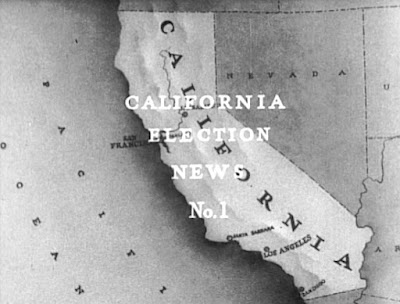 Portrait of the California governor’s race in 1934 when Upton Sinclair ran for governor  espousing the EPIC (End  Poverty in California) which was like FDR’s New Deal on Steroids. While Sinclair had the support of the people, the republicans, the money people, and the Hollywood Studio heads feared what would happen and put together what is the first modern attack campaign against Sinclair.

While I had always heard of the attack ads against Sinclair I had never seen them before. They were short films cut together as if a documentary in such a way that they highlighted the down side to Sinclair’s proposed policies. They used clips from movies and carefully edited documentary footage to make it seem like voting for Sinclair was going to bring about the end of life as we know it. While it is common practice now it was unheard in the 1930’s.

This is a super little film. It’s a film that deftly ties the whole story together, even bringing in recent film MANK which used the attack ads as plot point.  What I loved about the film is that while the spine of the film are the films from the governor’s race, the film gives us context for political attacks over the years both before these ads and after right up to Trump’s attacks on President Biden. We also get notes as to where some of the footage was pulled from.

Highly recommended, this film is required viewing if you want to understand how modern politics came into being.

For more information on the film go here.

Email ThisBlogThis!Share to TwitterShare to FacebookShare to Pinterest
Labels: film on film, politics