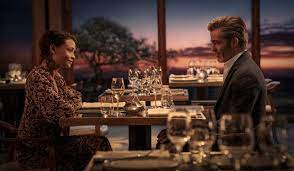 Eight years ago a terrorist hostage situation went south. The CIA station that was over seeing it was left gutted as their best efforts seemed for naught as everyone on the plane died in an act of suicide by the terrorists. Now its come to light that the terrorist behind it has been captured and he revealed that there was a leak from with in the CIA. In the hopes of running down the suspects one of the agents is sent to speak to his ex-girlfriend, another CIA agent who left the agency in the wake of the disaster.

This is a beautifully made film with a great cast. Its film whose craft pulls us in and carries us along because, for no other reason, this is the first spy film in ages where we want to just live for a while. This is a good thing because the plotting is so transparent that minutes into the film you’ll have sorted this all out.  Part of it, is that there is only a couple of ways this could go, and part of it the film doesn’t really try to hide what it’s doing. It throws out clues from the start and as a result we piece the big picture  long before we work out the details.

And the obviousness of the plotting kills me. I really would have loved not knowing how it was all going to go. Unfortunately I was so sure of the way this was going that I started farting around on line instead of using the film as a mind wipe as planned.