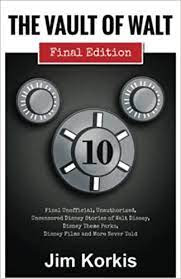 Billed as the final trip to the vault Jim Korkis’s Vault of Walt 10 is a fitting send off.  Over the last decade plus Korkis has been revealing hidden tidbits of Disney history. Korkis has gone into every aspect of Disneyana from the man to the films to the parks, it’s all been made public from one of the greatest historians working today.

Korkis is ending his series, not because there aren’t enough stories, but rather with the internet and the various sites there are increasing less and less numbers of untold stories. Korkis’ work shined because there weren’t that many people doing the leg work on Disney history and now there are hundreds. While Korkis’ is the grandfather and his work is the source for many other reporters, other people are finding the stories he wants to tell before he gets the chance. While it saddens me that Korkis is stopping I know he will be writing other books and still spinning out tales.

I’m happy to report that this is one of the best books in the series. While some of the material on Disney himself isn’t as strong as the reset of the book there are some great bits. For example the section on the making of ENCHANTED is great fun. I know someone who worked on the film and while they filled me in with details about the making of the film Korkis revealed a great deal more. There is a wonderful piece on Disney during Hurricanes. Additionally there are pieces on the up and down relationship of Disney and Rbbin WiIlliams, a look at the odd duck film CONDORMAN, how the Swiss Family Robinson tree house became Tarzan's, and an intriguing look of Disney on the radio. Plus much more.

This book rocks and is highly recommended and an absolute must for Disney fans.