Steve and Ariela on Marvelous and the Black Hole (2021) 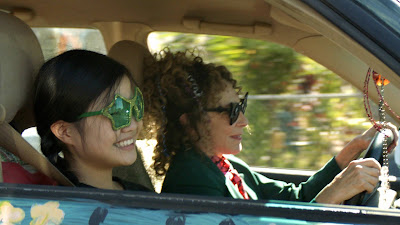 I saw MARVELOUS at last year's Sundance and fell in love with it.

MARVELOUS AND TH E BLACK HOLE may not be the highest of high art but damn is it entertaining.

The story is about 13 year old Sammy. She is trying to deal with the death of her mom. Unfortunately she has anger issues Her father tells her to either finish a course he has signed her up for r she is going to boot camp. She hates the course and tries to walk out on the first day and right into the path of an older woman who is a magician. Sammy is forced to become her assistant and the meeting changes her life.

Okay yes, you know how this is going to go, but you know what you won't care. This is a wonderful little film with heart and great characters. Its a film that simply charms you. Yes you've been here before, but you really don't care because you like everyone on screen.

And I need to say one thing while you know where it's going I don't think you'll sort out how it's gonna get there. There are a couple of gentle turns that keep everything fresh.

I don't know what to say other than this is a big hug of a film that put a smile on my face.

And then Ariela saw it  at Tribeca and she fell in love with it.

Marvelous and the Black Hole is about 13 year old Sammy, who is trying to deal with her mom's passing. She has anger issues and gets in trouble at school. The fact that her dad is dating someone new doesn't help.  Her dad makes her go to a community college to take some sort of career class. (This part didn't make sense, he was sending her to a community college as punishment?  Just seemed like a odd choice for a 13 year old).

Sammy walks out of the classroom on the first day to go to the bathroom where she gives herself a  homemade tattoo (this is how she often sadly deals with her anger).  In the bathroom she meets Margot, who points out her tattoo is bleeding. Margot then forces her to come to a classroom with her as her assistant where she's putting on a magic show.

This begins the start of their friendship and Sammy getting to learn all about magic.

This movie isn't one that's very unique. We've all seen this story before: troubled teen finds help in an older adult, but I really enjoyed it. I loved Margot's character and unique set of friends. I loved that it was magic focused.  The film had both dark, sad and funny moments. It was a very sweet and charming movie, and made me cry on more than one occasion.