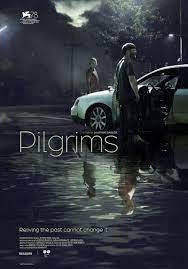 Is a solid drama.  It’s a bit low key and as such it may not appeal to everyone but for those who connect with it it is a nice little character study.

The film concerns Paulius who is the brother of Mateus. Mateus was murdered four years ago and he still hasn’t gotten over it. Traveling with Indre, his brother’s girlfriend at the time of the murder, he seeks to reconnect with his brother by revisiting the places, and people, his brother touched in the last hours of his life.

Let me be up front, there are no grand revelations about the events. What I mean by this is this is not a whodunnit, we know who did it and they were tried for the crime. What we are investigating is the interior landscape of the human heart. How does the was heart try to fix itself when it is broken. This film tries to figure that out.

This is a quiet little drama which has a big impact if t clicks with you. If you like a film where how someone acts and moves says as much as what it spoken this film is for you. I say that because there were a couple of times when I was taken aback by a look or a gesture which seemed to say more than the words. Both Giedrius Kiela and Gabija Bargailaite are wonderful.

I really liked this film a great deal. In a festival where the head is more often  tickled over the heart, it was nice to have a film that moved me.