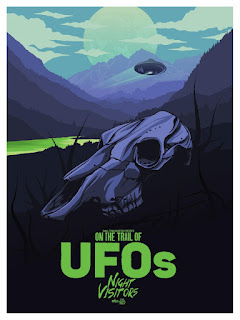 Small Town Monsters and investigator Shannon LeGro  are on the prowl again, this time to the Miller Ranch in southern Colorado. Tom Miller has had a number of his heads of cattle end up as victims of mutilation.  Complicating matters are sighting of black helicopters , weird sounds and  parts of the property where no one wants to go because really bad things tend to happen to anyone who go there.

In an age when the coverage of the weird things in the sky is getting sillier and sillier thanks to History and other cable channels needing to turn mountains out of ant hills it’s nice to know that director Seth Breedlove and the crew at Small Town Monsters are not taking things into ridiculous directions. They are turning out well thought out and films that are made with some form of care and no silliness. As a result when I see one of their productions hit my in box I usually jump at the chance to take a look. I may not always think they are on to something, but I’m curious enough to follow along.

Night Visitors is the latest from the group and it’s pretty good. There is something weird going on on the Miller Ranch and LeGro and Breedlove make a healthy stab at trying to find out what it is.  Do they uncover all of the dark secrets. No, but they raise a lot of interesting questions and entertain the hell out of us in the process.

As with all the films I’ve seen in the series I enjoyed it and recommend it, especially if you want time away from the cable TV circus that most TV shows of this sort inhabit.