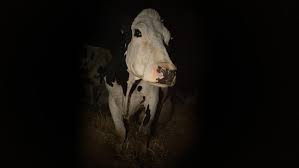 The life and times of dairy cow on a farm in England.

This is a cinema verité look at what the life of a dairy cow is like. It’s a series of long takes that put us right in the pens and fields with Luma, the cow at the center of the events.

How you feel about the film will be determined by how you fall in with the luma and the other cows. This really is a film that is all about the cows and what you get out of it will be affected by what you bring to it. I say this because in reading on the film I came a cross various takes about what the film is about. Various writers tied various details together to form their own narratives. In many cases they were things I didn’t notice or didn’t see as important and as a result the film took on a new look. I’m not going to tell you what various people said because I don’t want you to be influenced.  I went into the film blind and I came out with my own thoughts, however now I’m still pondering what it all means… or if it means anything.

Honestly the fact that this film can be read in various ways lifts it up. Great movies should not have only one way of looking at it.  COW has multiple ways of seeing the film and as such it’s something special. Anyone can look at the film and take different things away from it. Because of this COW is a truly special film