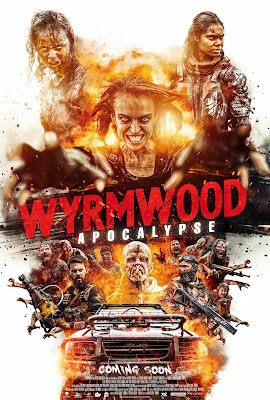 Eight years on we get a sequel to WYRMWOOD: ROAD OF THE DEAD, a Mad Max/zombie hybrid horror comedy action film that seemed more intent on looking cool than getting the tone right. We return to the  days of the zombie plague with everyone looking for cure to the disease and feeling it might be with a hybrid

This film is filled with an intensity and urgency you only find in films. its the sort of thing that either works or falls deep into parody- even if its not supposed to be serious. This is supposed to walk the fine line between serious and knowing humor unfortunately it plummets into over done siliness - that pulls it all down.

As with most zombie/madness  little of this makes sense. Being a second film, there is almost no exposition to bring us up to speed, the film just opens and goes and assumes that we know what the hell is going on.  That all would be fine but eight or so years later this minor sequel to a minor film could have used a tad of explanation or reintroduction. Frankly I barely remember the first one, and I doubt most other people do, so I felt a more than a tad lost. It quickly switched to not really caring. Yea the action and gore are cool but frankly it's not enough. With out a plot it means nothing.

As with most of these sort of films there is little sense. There is basically a few survivors and an endless supply of monsters.  As with all of these films where all the zombies come from in the middle of the wilderness is never addressed. As are the rules of the world. Additionally the rules of the world seem to come and go as needed.