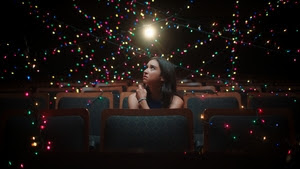 DISFLUENCY the name for not being able to put words together to express a thought. Its something we all experience at one time or another. Jane is a young woman who is trying to finish up her class work in speech pathology and manages to blow her final presentation putting her academic career at risk. Going home to regroup and prepare for a make-up presentation. However it soon becomes clear that there is more going on inside jane than we initially are lead to believe.

This is a really good film. It’s the rare drama that feels more like real life than real movie life. For better or worse too many narrative of late feel good and entertain but they don’t really feel like real life. DISFLUENCY does, thanks in large part to the performance of Libe Barer, as Jane It is through her eyes that we come see and feel things in ways that make what happens  feel like it was ripped from real life.  This isn’t to short sell the script by Anna Baumgarten, which refuses to be neat in tying things up, rather it’s Barer's performance that sells it to us with out question.

I need to mention that there is a weird thing happening in the discussions of  DISFLUENCY that had me shaking my head. While there is an indication in the early part of the film and the official material that all is not right with Jane, we are largely left to discover what is happening on our own. As we watch the film more or less blind we are left to watch the film peel away the layers of the story until we are left bruised and battered by the turn of events. On the other hand the almost every review or piece on the film spells out what happens in the film. I know why this is, the writers who are discussing the events are connecting it up to their own lives in a cathartic release, but at the same time I get a sense that the discussions might diminish the narrative for some. I say this because some pieces were quite detailed in discussing turns.

Quibble or not this is a great film.

DISFLUENCY plays at the Florida Film Fest April 10 and 13 and is highly recommended.