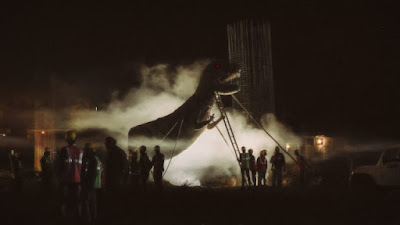 Epic drama this is a tale of the city and those that crisscross through the life of a woman named Ela.  Her daughter recently has passed away and she is left drifting. She lives with her husband but live in separate rooms. She needs money but can't sell the theater she was left by her father because her step brother haunts it. She turns to working for her ex-boss a schemer running scams. She also tries to connect with a lost love.

This is a seemingly simple film that grows deeper as it goes on. The more we learn, the farther in we get the more the film expands into a something greater than we had first thought. This is not about just the characters, or humanity but the city and the cycle of life. We are on a wheel of change that everyone and everything must contend- whether they want to or not.

I love this film a great deal. This is one of the few times where I love the use of ONCE UPON A TIME... in the title. I love it because it infers the scale- both epic and small scale. I love how we are seeing a tale that is being pulled out of a city.

This is one of my favorite films from New Directors. It's a film that caught me unaware and delighted me, even as it broke my heart in a million pieces.

What I also loved is this is one of times where I have to thank the programmers of the NDNF series. This film ties in perfectly with other films such as WHITE BUILDINGM, CITY AND THE CITY, and others to form a mini sidebar.