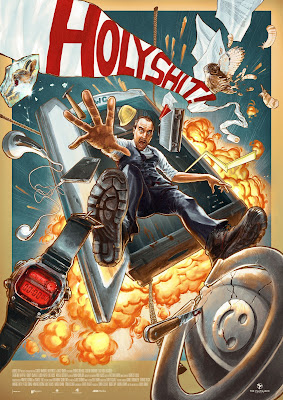 If you want to see a nifty comedic thriller and can completely shut off your mind, then ‘s film is for you. This is a crazy ass film about a guy who wakes up in a Porta-Potty that is in a worksite that is about to be dynamited. It’s off color and frequently over the top film that will have you laughing and wincing as the tension grows.

And as long as you do not think about the logic of it all it’s a fantastic thrill ride.

The key is at no point can you think about what is happening because as soon as you do the film begins to fold in on itself.

The problem with the film  is that once the film starts to explain how our hero ended up trapped in the toilet things begin to break apart. The turns of the plot make no sense even with in the frame work of the film. Clearly director Lukas Rinker wanted to go for a raucous reaction from his audience but he pushed things too far. Where the film’s logic begins to break  about half way in, the film completely collapses as any sort of real narrative in the final 15 minutes when things go for over the top gross humor instead making sense. Its literal shit covered comedy with a villain so unbelievably cartoony that he would  have been bounced from the stage in the mustache turning days of melodrama.

Don’t get me I watched to the end, laughing all the way, but I was disappointed that the cleverness of the first half lessens as the film goes on to the end.

This is gonna be best with a large audience. Otherwise this is a pass

This film screened as part of Fantaspoa 2022. For more information on the festival, please visit www.fantaspoa.com
Posted by Steve Kopian at April 24, 2022