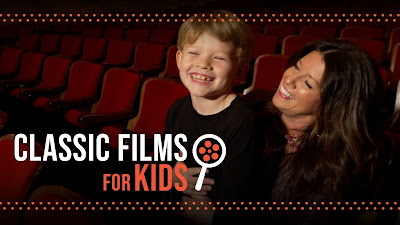 Classic Films for Kids will be hosted by Jennifer Churchill, classic film enthusiast and author of Movies are Magic, the children’s book dedicated to an engaging and educational look at the history of film, which features an introduction from Turner Classic Movies (TCM) primetime host Ben Mankiewicz. She is joined by co-host, son Weston,7, exploring family-friendly programming with Golden Age stars from Abbott and Costello to Shirley Temple.

New episodes will premiere every Saturday morning at 11 a.m. ET on The Film Detective channel, followed by SVOD releases on TFD’s classic film and television app, beginning with Jack and the Beanstalk on April 2.

“It’s so important to make sure kids know about these films,” said Churchill. “A lot of kids only see modern movies with fast editing, explosions and CGI. It’s really important for them to know the history of film and that these movies exist.”

“We are thrilled to partner with Jennifer to bring new life to these family-friendly classics,” said Phil Hopkins, president of TFD. “Audiences of all ages will enjoy Jennifer and Weston’s love of the classics and learn why teaching new audiences about the history of film is so essential.”

Classic Films for Kids is the latest in a series of collaborations between TFD and Churchill, who’s exclusive audio commentary has been featured recently on such TFD special-edition Blu-ray and DVD releases as Dancing Pirate (1936), The Fabulous Dorseys (1947) and the upcoming Girl on a Chain Gang (1966), being released April 19.

About The Film Detective:

The Film Detective (TFD) is a leading distributor of restored classic programming, including feature films, television, foreign imports and documentaries and is a division of Cinedigm. Launched in 2014, TFD has distributed its extensive library of 3,000+ hours of film on DVD and Blu-ray and through leading broadcast and streaming platforms including TCM, NBC, EPIX, Amazon, MeTV, PBS and more. TFD has released its classic movie app on web, Android, iOS, Roku, Amazon Fire TV and Apple TV and is available live with a 24/7 channel on Sling, STIRR, Plex, Local Now, Rakuten TV and DistroTV. For more information, visit www.thefilmdetective.com

For more than 20 years, Cinedigm has led the digital transformation of the entertainment industry. Today, Cinedigm entertains hundreds of millions of consumers around the globe by providing premium content, streaming channels and technology services to the world's largest media, technology and retail companies.

Email ThisBlogThis!Share to TwitterShare to FacebookShare to Pinterest
Labels: Classic Films For Kids