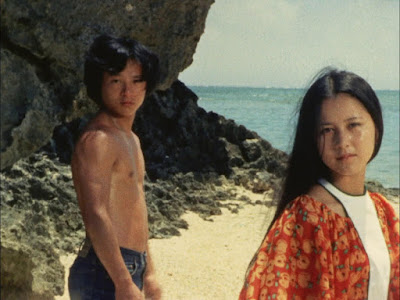 (Available to stream in North America or globally. See individual title for details.)

New York, NY (April 13, 2022) Marking 50 years since Okinawa’s reversion from American sovereignty back to Japan, Visions of Okinawa documents the dynamic historical, political and cultural spaces of Okinawa around this pivotal point in history through in-person screenings and streamed films exploring the legacies of the Occupation, WWII and imperialism. Primarily focusing on films made around the time of or dealing with the 1972 reversion, Visions of Okinawa addresses issues of identity, race and borders by presenting diverse and complicated reflections on the prefecture from mainland filmmakers, native Okinawans and documentarians.

North American Premiere of 2021 edit. Go Takamine’s rarely screened first theatrical feature is a pioneering work of Okinawan cinema. Taking place shortly before the resumption of Japanese sovereignty over Okinawa, this leisurely-paced film tacitly addresses the island prefecture’s complicated history of occupation through the story of a community’s preparations for a wedding between a local girl and a Japanese teacher. On the periphery of these events is Reishu, who quits his job on a U.S. military base and uses the extra time to catch snakes and play with ants—and get the bride-to-be pregnant. Screening followed by reception.

A lo-fi PC game becomes the impetus for a mnemonic exploration of the past when a computer programmer (Catherine Belkhodja) is tasked with recreating the Battle of Okinawa. In dialogue with her deceased lover, she embarks on a haunting exploration of Okinawa’s history, navigating information networks populated with testimonies, interviews (including one with director Nagisa Oshima), eye-witness accounts and archival footage—prompting a cathartic convergence of thought, image and memory interwoven within Marker’s uniquely digital framework. The final feature by Chris Marker, Level Five examines the forgotten tracts of history that still reverberate throughout Okinawa—a locale that, as Marker puts it, has not forgotten the war.

Released the year of the reversion, Oshima’s final ATG production presents an uncharacteristically cheerful exterior with its faraway passages to tropical vistas and cinema-verité naturalism. Teenage Sunaoko receives a letter from her stepbrother, inviting her to visit him on Okinawa, and together with her guardian Momoko, she travels to the prefecture under the guise of a tourist. Their guide, a beer-guzzling ex-soldier, takes them to the locale’s tourist attractions, quickly delving into the underlying scars of the island’s wartime history. With its contradictory, light-hearted tone, Oshima’s disruptive politics reveal entanglements of identity, generational disputes on Okinawa’s future, and the complicated nature of the islands’ history with Japan, all accompanied by the breezy, sundrenched bliss of Toru Takemitsu’s breezy score.

A fictionalized depiction of the fourth Okinawa War (still ongoing at the time of the film’s release), Terror of Yakuza situates the yakuza conflict in the days following Okinawa’s reversion, when encroaching mainland gangs wanted in on a piece of the action. Banned from release in Okinawa, director Sadao Nakajima’s Terror of Yakuza features a psychotically unhinged performance from the late Sonny Chiba and would trigger a string of Okinawan-shot productions in the years to come. Cultural critic Isao Nakazato would later write that, “the struggle of Okinawa is represented in the blood feud” of Nakajima’s ripped-from-the-headlines classic.

Go Takamine’s celebrated adaptation of the famous Uchinaa Shibai play follows Giru, a day laborer, who flees his post after seducing his employer’s daughter. Escaping his boss’s wrath, Giru hides in the mythical Untama forest where he is bestowed with mystical powers, transforming himself into the Okinawan folk hero Untamagiru. Featuring the acting talents of Jun Togawa and John Sayles, Takamine’s essential opus of Okinawan cinema follows the film’s titular character as he attempts to create an independent Okinawa on the eve of the reversion.

Films listed below stream online May 14-June 3 at film.japansociety.org.

Go Takamine’s rarely screened first theatrical feature is a pioneering work of Okinawan cinema. Taking place shortly before the resumption of Japanese sovereignty over Okinawa, this leisurely-paced film tacitly addresses the island prefecture’s complicated history of occupation through the story of a community’s preparations for a wedding between a local girl and a Japanese teacher. On the periphery of these events is Reishu, who quits his job on a U.S. military base and uses the extra time to catch snakes and play with ants—and get the bride-to-be pregnant.

Formed in 1968 at Waseda University, the Nihon Documentarist Union (NDU) was once one of the most influential collectives of Japanese nonfiction filmmaking. Emerging from the student movements of the late 1960s, the politically active NDU produced guerilla-style 16mm documentaries shot with asynchronous sound, and wrote extensively in leftist film journals, magazines and other publications. The group posited an activist cinema of anonymity—rejecting auteurism and opting to exclude individual names from their credits. But while contemporaries like Ogawa Productions have since gone on to international recognition, the groundbreaking work of the NDU has remained in relative obscurity both in Japan and abroad.

In 1969, with negotiations for Okinawa’s return to Japan reaching their final stages, the NDU took to Okinawa, illegally entering the prefecture to document the lives of those marginalized by the region’s history of occupation, exposing the contradictions and systematic issues present within Okinawa’s relationship with Japan and America. Japan Society is proud to present two essential NDU productions shot during their time in Okinawa: Motoshinkakarannu and Asia is One, screening for the first time outside of Japan with new English subtitles.

Shot over a period of 15 months from April 1969 to July 1970, Motoshinkakarannu–which takes its name from the Okinawan word for “business without seed money” (a euphemism for prostitution)—captures a tumultuous time in Okinawa’s occupation. With the impending reversion, the NDU chronicles a confluence of sentiments across the island prefecture from anti-American riots to labor protests. An immediate and radical work, Motoshinkakarannu delivers an unflinching snapshot of Okinawa at the time, revealing racial tensions, discrimination, imperialist gazes and more through its raw immersion into the lives of sex workers, yakuza, tourists and GIs.

Lost for decades, Asia is One was rediscovered in 2005. Shot around the time of the reversion, Asia is One initially begins by capturing shifting perceptions in Okinawa and economic developments—from the onset of increased tourism and cultural preservation, to the exodus of islanders migrating to the mainland for better opportunities whether for work, education or a better life. Composed of testimonials, Asia is One uncovers the history of labor abuse and exploitation by mainland mining companies since the 1930s and documents the Taiwanese and Zainichi immigrants who worked in these harsh mines, confronting the legacy of imperialism alongside concepts of border and identity on the vast stretches of islands that lead down to Taiwan.

Japan Society is the premier organization connecting Japanese arts, culture, business, and society with audiences in New York and around the world. At Japan Society, we are inspired by the Japanese concept of kizuna (絆)–forging deep connections to bind people together. We are committed to telling the story of Japan while strengthening connections within New York City and building new bridges beyond. In over 100 years of work, we’ve inspired generations by establishing ourselves as pioneers in supporting international exchanges in arts and culture, business and policy, as well as education between Japan and the U.S. We strive to convene important conversations on topics that bind our two countries together, champion the next generation of innovative creators, promote mutual understanding, and serve as a trusted guide for people everywhere who seek to more fully appreciate the rich complexities and abundance of Japan. From our New York headquarters, a landmark building designed by architect Junzo Yoshimura that opened to the public in 1971, we look forward to the years ahead, which will be defined by our digital and ideational impact through the kizuna that we build. Our future can only be enhanced by learning from our peers and engaging with our audiences, both near and afar.

Visions of Okinawa: Cinematic Reflections is supported, in part, by an award from the National Endowment for the Arts and a generous gift from The Globus Family

Members: 20% off via promo code