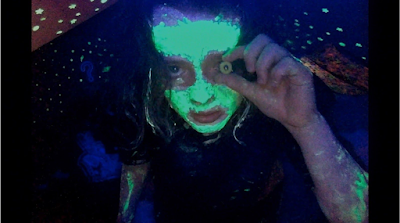 A young girl gets lost while playing an on line video game and chatting with another player.

I haven't figure out if I didn't like ...WORLD'S FAIR because it's not that engaging or because I'm not connected to the online world as much as Casey our heroine.  I know part of my dislike is the device of having most of the film being  either people sitting staring at the computer screen or images of the computer. Yes there are other images but so much of the film is computer related my interest waned.

My interest waning was not because what was there was bad, more that too many of the sequences run on way too long. The opening shot of the film is roughly ten minutes long.  While it sets up the sense of isolation and the character and the "world" it goes on way too long. Several other sequences do the same thing, staying  much too long.

I should point out that my dislike of the film is not the result of anything being wrong with the story, the acting (Anna Cobb is excellent in a demanding role) or the actual technical filmmaking, my problem is more with the presentation which is uneven. While there were sequences that impressed the hell out of me, the hands out of the computer sequence had me talking to the screen (and rewatching it), the pacing was off and the static meandering of much of it made it a tough slog to get through.

In all honesty there is a good chance that I am not the audience for this film. In the press notes writer director Jane Schoenbrun talks about how she is making the film for a specific audience who will find hope in her discussion of dysphoria. There is a good chance that my not being trans or nonbinary I can't fully connect with what she is trying to say simply because it is outside my experience. There is nothing wrong with that. It simply means that I will have to walk away until I can find a way to connect.

While I didn't like the film as a whole I will say that there is enough good here that I want to see what writer director Jane Schoenbrun does next.