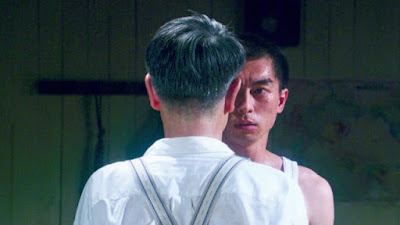 Onoda hit me like a ton of bricks. The true(ish) story of a soldier who remained on station alone for decades, seemingly forgotten by his army moved me. There is something about the notion of duty and honor and all of the motions tied up with that really hit home for me.

While the film is based on the life of Hiroo Onoda who remained in the Phillipines for 30 years after the end of the second world war, it is not a historically accurate on his story. The film is not based on Onoda’s memoirs but uses the work of Cendron and Gérard Chenu’s biography and archive as a jumping off point.  Director Arthur Harari and Vincent Poymiro take his story and fashion it into an emotional tale of a man trying to stay alive and do what he feels is his duty. It’s a film rich with ideas, themes and especially emotion. Onoda is not a crazed soldier, he is something much more complex and Harari and Poymiro explore the inner landscape of the man. We are moved by his plight.  By the time the film ended and we saw his journey home I was misty. I felt for him.

To be honest there is a lot going on in this film and I need to see it again a few more times to really feel comfortable discussing it. Its not that there is anything wrong with the film, more that there is so much right with it that I don’t know where to start. I don’t know what I should discuss and what I can leave for you to discover. Yes the film runs almost three hours and it’s a very full three hours. Every moment is carefully constructed to move things along either narratively or emotionally. This is a film where long takes and silences are just as important as motion and dialog. In trying to write on this film I have run into the best sort of a problem , how do I express how a film makes you feel and how it alters how you think.

Frankly I am in love with this film. 45 minutes into watching it I shot off a brief Tweet that I was watching a film that was making me wonder why more people weren’t talking about it. This film that reminds me of all the films from the early to mid 1970’s that opened my eyes to what cinema outside of Hollywood was like. This is a throw back to the grand  days 40 or 50 years when “art cinemas” where opening the minds of regular people to cinemas as literature.

This is one of my favorite films the year so far.