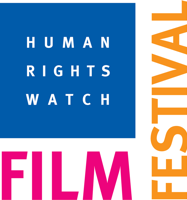 New York, April 12, 2022 — The Human Rights Watch Film Festival, now in its 33rd year, will present a full edition of 10 groundbreaking new films, available both in-person and online nationwide in the U.S., from May 20 to 26, 2022. For the first time in two years, the New York festival will be back with a full program of in-person screenings at Film at Lincoln Center and IFC Center, with in-depth discussions with filmmakers, film participants, activists and Human Rights Watch researchers. The festival will continue to offer the opportunity to watch all 10 new films online across the U.S. with a full digital edition of the film festival.

This year’s edition highlights activism and features courageous individuals around the world standing up to powerful forces and demanding change. John Biaggi, Director of the Human Rights Watch Film Festival, said, “We are thrilled to be back in theaters after two years away, bringing our audience a full slate of powerful films tackling urgent human rights issues including China, Russia, the climate crisis and reproductive rights.”

“The partnership between Film at Lincoln Center and Human Rights Watch is more important than ever in demonstrating the power of film to shine a light on international crises and individuals fighting for freedoms and human rights around the world,” said Lesli Klainberg, President of Film at Lincoln Center. “History has shown that film not only empowers understanding, but also ignites urgent public dialogues about how to help the most vulnerable.”

John Vanco, Senior Vice President and General Manager at IFC Center, said, “IFC Center is proud to continue our partnership with the Human Rights Watch Film Festival and support their mission to use cinema to shine a light on important issues.”

The festival opens with Rebellion, the exhilarating behind-the-scenes story of Extinction Rebellion (XR), following the group as it takes daring steps to draw attention to the climate emergency, and confront both internal tensions and the harmful power structures in the climate movement itself. The festival will close with the Sundance Film Festival hit, The Janes, which showcases a group of brave and bold women, many speaking on the record for the first time, who built an underground, clandestine network in 1970s Chicago for women seeking safe, affordable, but otherwise illegal, abortions.

With stunning animation and powerful interviews, Eternal Spring tells the gripping story of brave members of a religious movement who protest their persecution by the Chinese government by hijacking the local TV station. And, the one drama in this year’s festival, You Resemble Me, is an impressive first feature by Dina Amer which explores the complex life of Hasna Aït Boulahcen, a survivor of abuse in France who sought support and opportunities to belong, but whose life was cut short by her radicalization. The film premiered at the Venice Film Festival and its executive producers are Spike Lee, Spike Jonze, Riz Ahmed and Alma Har’el.

In Delikado, three environmental defenders are tested as never before in their battle to save their home, Palawan, an island paradise in the Philippines, from the illegal destruction of its forests, fisheries and mountains. Clarissa’s Battle features the single mother and unstoppable activist Clarissa Doutherd, who works tirelessly to build a coalition of parents in Oakland, California, to fight for local and federal child care funding. With brave honesty a group of Kurdish and Yazidi women reveal the challenges they face in a male-dominated society in Up To G-Cup.

The New Greatness Case offers remarkable access to a group of young Russians entrapped by the secret service, resulting in unjust trials and prison sentences, echoing the intensified crackdown on dissent and free expression in Russia seen on the news every day. In Midwives, amid an environment of ever-increasing chaos and violence against the Muslim Rohingya population in Myanmar’s Rakhine State, two midwives, one Buddhist and one Muslim, work side by side in a makeshift clinic, providing medical services to the oppressed minority community. No U-Turn, by the celebrated Nigerian director Ike Nnaebue, takes viewers on a journey with Nigerian citizens leaving their country, traveling north through Africa and beyond in search of work and opportunity to build a future, despite the known and unknown challenges lying ahead.

As always, the festival strives to prioritize space for identities, viewpoints, forms of expertise and experiences either silenced or marginalized in the film industry, news, and media. 70% of this year’s filmmakers are women and 70% are sharing a story about their own region. This program reflects the festival’s ethos of celebrating diversity of content and perspective. Select films in this year’s festival will be audio described for audience members who are blind or have low vision, and closed captions will be offered for deaf and hard of hearing members of the audience. See website https://ff.hrw.org/newyork for accessibility specifications for each film in the lineup.

To View the Films

Tickets will be available for sale beginning April 21 for members of IFC Center, Film at Lincoln Center and Human Rights Watch, and April 22 to the public. Audiences will be able to purchase In-Theater tickets online or at the Film at Lincoln Center and IFC Center box offices. For ticket prices and more please visit https://ff.hrw.org/newyork, https://www.filmlinc.org or https://www.ifccenter.com. Virtual tickets can be purchased online for each film for $9 for General Public and $6 Members, or a digital festival pass that will provide access to all 10 films online can be purchased for $70. Further discount information available on ff.hrw.org. The full festival will be available to rent on the festival streaming site from May 20, 9am EDT until 11:59pm PST May 26, 2022. Please visit ff.hrw.org for details and accessibility options for each digital presentation.