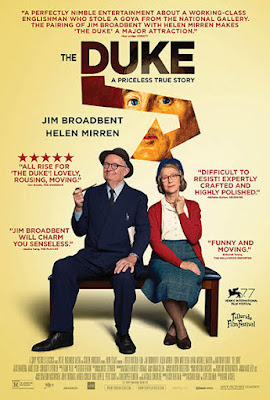 The Duke is the true story of Kempton Bunton who fought tooth and nail against the British TV licensing fee. If you had a TV you have to pay a fee in order to support the BBC. Buntonrefused to do so and as such he made it so his TV couldn’t get the BBC, however that didn’t matter and they tossed him in jail. A few years later a portrait of The Duke of Wellington by Goya was stolen. Ransom notes were then received saying that the painting would be returned when the licensing fees stopped. Eventually Bunton was arrested….but that’s only part of the story.

I’m not going to lie and say I was enraptured by the plot. The problem for me anyway was that a short time before I saw the film I saw I documentary on art theft and they mentioned the case. They basically covered the whole story in a couple of minutes. Unfortunately the film didn’t add much to what I saw in the documentary

however this charming footnote story is made must see viewing thanks to Jim Broadbent as Bunton and Helen Mirren as his long suffering wife. Seeing the pair in action is what makes this film go and what keeps a smile on our  faces for the entire 100 minutes. It’s always a pleasure to see the pair in anything, especially when they get to chew the scenery and be utterly…charming. I fell in love with what I was seeing because Broadbent and Mirren made damn sure I was having a good time.

This good little film is recommended for two magnificent turns.