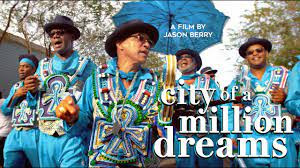 Nominally this is the story of New Orleans Jazz funerals it is actually a cultural history of the city and the people in it.

I am a sucker for the jazz funerals that we see in the film.  Ever since I saw them as a  kid I wanted one. If I have to die, I want to have one  to send me off.

I really liked this film. I liked that the film not only showed us what we think of as a jazz funeral with a band marching in the street, but I liked that we see how it spun off in other directions. I also love how the film shows us how they influenced everyone in the city.

This is a sweet film.