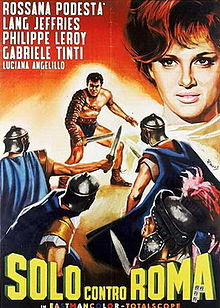 After subduing a rebellious province a Roman counsel takes over the home of one of the wealthy citizens pressing the daughter of the owner into service.and sending her fiance to the arena. A rebellion rises up in an effort to over throw the Romans.

Better than average historical drama is ripe for rediscovery. How this film didn't get attention after GLADIATOR, which looks to have lifted bits of this, is beyond me.

The film scores with a great cast,  and great action sequences that don't appear to be walked through. This is a film where everyone actually seems to care about hat is going on. This is more than a just a paycheck job.

What also sets the film apart from other similar films is that the film doesn't focus on simply one or two characters. There is a wade swath of people populating the film and as a result things feel more real. Additionally there is shading to the Romans. They are not all black or white but a shade of gray with their actions truly being okay in their eyes. This adds a complexity almost always missing from other similar films.

One of the best sword  and sandal films ever made is definitely one to search out
Posted by Steve Kopian at April 07, 2022

Email ThisBlogThis!Share to TwitterShare to FacebookShare to Pinterest
Labels: swords and sandals