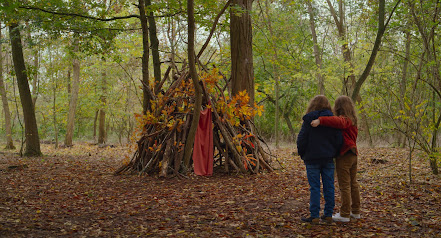 Had a strange, half-remembered dream (is there any other kind?) a couple of nights ago. And because I’m probably older than you, I’m not sure you’ll be able to relate to how disorienting it was. Sparing you the details, I’ll just point out that I awoke from it with a single, ringing thought in my head: “My dad was some young guy…?”

It’s that tone, my own perplexity, that sticks. And that italicized emphasis, almost with disdain or embarrassment, signals both a stupid truth and (possibly) a deeper revelation. As an observation, it’s not worth much—in fact, it’s a bit of a cliché to realize that “one’s parents were once young.” It’s often part of some discourse about forgiveness, perspective, maybe nostalgia.

But to experience that truism with immediacy, and with the full weight of reality behind it, is something else. And of course this is also very close to the premise of Céline Sciamma’s new film, PETITE MAMAN, which has its U.S. release on April 22. Whether my dream was simply a lingering echo of having seen the film a week earlier, or whether the film somehow anticipated the dream, is something I’ll never figure out; but the fact that I’m not sure speaks to the power of what Celine Sciamma has accomplished. It’s another’s dream, sure, but one that will infiltrate you as far as you’ll let it.

Sciamma’s approach neither overplays the uncanny elements for their own sake nor relegates them to the background as “mood” in favor of the particulars of her characters. Instead, both she and the eight-year-old protagonist practice a form of all-encompassing acceptance that recalls something of the spirit of PORTRAIT OF A LADY ON FIRE, especially its ending. As an artist, Sciamma not only wants to have her cake and eat it, too, but suggests that that’s kind of the point of art: to experience what it’s like to go against our natural inclinations and so discover our better ones. She invites you to have a slice, too.

And so, with unseen thunderheads above, issues of abandonment in the air, and lots of laughter, we’re enticed back into a wiser kind of childhood. That’s the true fantasy here: the idea that it’s possible to be sufficiently precocious to enjoy life as the young do but with enough adult experience that we never need to cry about anything. In the world of PETITE MAMAN, youth isn’t something that exists in opposition to mortality, and joy doesn’t assert its value only because of how it combats dread. Those are grownup notions and strategies that would take all the fun out of youth and joy. Rather, these are all pieces of a bigger mystery, one that there’s really no reason to try to understand.

PETITE MAMAN is a small film in countless ways, but that belies how much it’s saying about life—our lives. In the end, we’re all playing games, acting out humorous, self-generated dramas, and sleeping in the homes of dead people. And we're always wondering when, exactly, we’re going to leave.