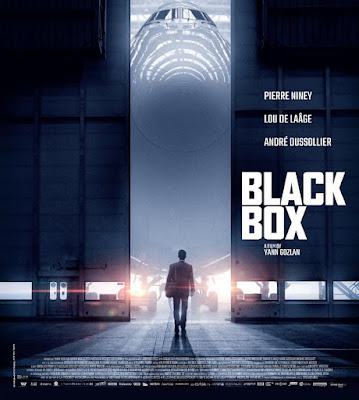 Give Black Box a few minutes and you’ll be belted in for a rollercoaster ride to the end. This is an old school throw back to the paranoid thrillers of the late 60’s or early 70’s that hooked audiences and changed the way we saw the world. Think Parallax View, The Conversation, or Blow Up, but with a modern sheen.

The plot of the film follows an audio expert who works for the French version of the NTSB doing crash reconstruction. He gets drawn into the case of a passenger crash that killed 300 people. The people who are supposed to be finding out what’s on the voice recorder have gone missing so they turn to him to unlock what exactly was said in the final moments of the flight. It’s not giving anything away to say he finds something hinky and begins to pull at the thread.

While the set up is nothing new, how it plays out is not. We’re in a world where you would think modern devices would make somethings in possible, but the truth is this film opens up all sorts of uncomfortable possibilities. No one and nothing is safe. By the time the film ends I was frightened to do anything.

I really liked this film a great deal. While the straight forward nature of the film is a bit distancing, the cold sheen adds a great deal to everything. By the time we warm to the characters we are truly invested and truly fear for what is going to happen.

I know I am being vague and less then detailed, but this is one of those films that works best the less you know. Actually the best thing I can say it is just see it. Don’t read on it, just see it.