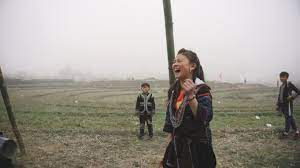 If you ever wondered if the director of a documentary will put their camera down and intervene then CHILDREN OF THE MIST will answer that question since director Ha Le Diem steps up and stops a kidnapping when her subject Di is made the target of kidnapping.  She is being kidnapped so that despite being only 13 she is to be married off to a local boy who fancies her. This despite the fact the legal age of marriage in Vietnam is 20. It seems that in remote areas of the country, the kidnapping of young brides is still practiced.

CHILDREN OF THE MIST is the story of DI. She is a young girl on the verge of womanhood, who sees a future outside of the village. She is curious enough to want to expand her mind and continue her education as far as she can. However she is also at the age when the young men around her are contemplating taking her for a bride. It is a fate she is not looking forward to since she sees what the practice has done to her older (but not my much) sister who already has two kids. Over the course of the film we watch the rhythms of the village and watch as the old ways refuse to die.

I was riveted. I was shocked.

This film was absolutely not what I was expecting with the result that the film became something deeply moving. I sat in my seat watching events unfolding, uncertain at times if I was really seeing what I was seeing, an totally shocked as things played out. I mean there is a weird disconnect between the violent removal of the young woman and the matter of fact way it was carried out.

You need to see this.

One of the must sees for New Directors New Films