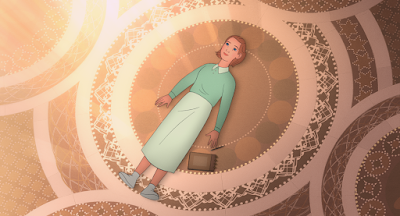 This is the artist Charlotte Salomon who was killed in Auschwitz after leaving behind a large body of work including the massive LIFE?THEATER? painting cycle consisting of over 1000 paintings many with stage directions and comments, making a kind of proto-autobiographical graphic novel. The film is a portrait of her up to a certain point with pre-credits text filling us in with what happened to everyone and Charlotte’s work.

Salomon’s life has been the subject of films and documentaries over the years (I highly recommend the documentary LIFE? OR THEATER? From 2011)  and I was familiar with her story from the earlier films. This animated film is a very good historical drama and telling of the story. However in watching the film I ran into the same problem that I had with other films which is that I failed to fully connect to her. I love her art but she still remains a kind of cypher.

I do have to say that I love the choice to do the story in animation. This allows for some truly wonderful effects as the paintings come to life. It is also a very good opening up of the doors to the medium t a wider audience since the story is not for little kids since it deals with not only the Holocaust but also Charlotte's love life.

My own reservations aside I still recommend CHARLOTTE highly for anyone interested in the subject. The English voice cast headed by Kiera Knightly is first rate. Additionally the film brings home the Holocaust and life during wartime to a generation who doesn’t really know what either things is.