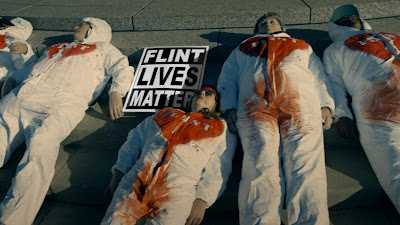 Portrait of what happened in Flint Michigan when the governor decided I would be cheaper to switch the water source for the city from Lake Huron to the (polluted) Flint River. Despite being told they could purify it enough to use, they couldn’t. The water from the tap was an ugly brown, it tasted awful and caused rashes for anyone whole bathed with it.

Belt in boys and girls this is a going to crush you. It’s not so much that they fucked up and started to harm the people of the city who now must use bottled water and baby wipes, rather it’s simply that no one is really doing anything to fix the problem. The water is still unusable and everyone is bitching about the cost, which is getting worse and worse because of the bottled water and wipes.

Honestly there is a lot to take in. My head was spinning. My heart was broken. This situation is so absolutely wrong I don’t have the words. I was brought to my knees.

As moving as the film is the film has one flaw which may work against it for some people which is there is almost too much to take in. The film runs roughly two hours and it fills pretty much every minute with something to enlighten or move you. It’s a minor quibble, but one I mention because when the film was done I had to let it sit with me for the rest of the day while I tried to connect everything up.

Quibble aside, You really need this film.

This is a massively tragedy that potentially heralds similar situations across America and the globe.