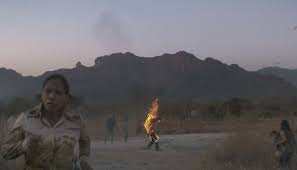 Natalia López Gallardo first film as director is a hard film to describe. Following a number of people in Mexico who end up looking for a missing person in the country.
While absolutely a beautiful film, with some stunningly stage sequences and images that burn into your brain for all time, ROBE OF GEMS is narratively confused. Gallardo strives very hard to make a film that you have to work with  but ends up making a film that isn't very clear.  Watching the film I stopped it a couple of times to look at material on the film in the hope of finding something that I felt a I missed and didn't catch by replaying a sequence or two.
This is a film that is very much about something- though it's not completely clear what that is. Actually this is a film that is clearer when you read the official material- which for me is a big no no, since it is my feeling everything we need should be on the screen.
A beautiful and visually haunting miss.
Posted by Steve Kopian at April 22, 2022