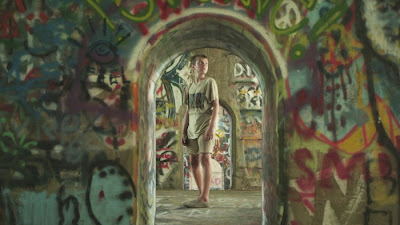 This movie really didn't float my boat. I knew I wasn't going to click with the film five minutes in and while I rode it out it never meant much to me. Peter on the other hand enjoyed it way more with the behavior of the teenage boys resonating  with him.

Told in longish static shots (for the most part) this is the story of two brothers who deal with the angst of being a kid. We watch as they fool around, go swimming, wrestle, deal with feelings and all of the usual kids stuff. We also deal with the ripples that are felt one one of their number dies in a fall  from an old railroad bridge.

Full of carefully composed shots (many of which seemed to echo Stand By Me) and full of silences and people of all ages trying to make sense of life this is a deep  and meaningful film which left me rather cold. Little happens other than we watch people deal with some weighty issues. I kept wanting to ask "and you're telling me this this way because...?"

Part of the problem with the film is that some things don't quite mesh. There is a scene where the brothers and their parents are sitting around talking about the dead boy and we hear someone is crying...but no one in the close ups is. There is also a weird disconnect as to the time frame that the story takes place. How many days pass? It's not clear.

Personally I found the film to be one of the very major misses up to the point I saw it (it was the 19th film I saw ) On the other hand Peter and some others were moved by it. The choice is yours.
Posted by Steve Kopian at April 28, 2013