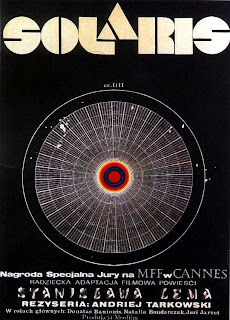 Andre Tarkovsky’s long hypnotic adaption of Stanislaw Lem’s novel was billed in the US as the Soviet answer to 2001. The insanity of that statement is pure PR hype. Other than both films being heady science fiction films that have little in common.

Lem’s story of a living planet was refashioned, much to the displeasure of the author, into an examination of life, how we see it and how we remember it.

Kris Kelvin is sent to a distant space station around a weird living planet called Solaris. There are only a few people on the station since weird things have been happening and most people have been run off. As Kelvin investigates what is happening he is visited by what seems to be his dead wife now alive and completely unaware of her own bad end. As Kelvin deals with the strangeness of what’s happening (it’s not giving anything away to say that the strange visitors, including Kelvin’s wife, are projections from the planet) He begins trying to relive his past and correct it….but can he? Can any of us?

Less a science fiction film, than an examination of the human heart and how we retreat into the past and attempt to correct it so it doesn’t hurt us, Solaris is a masterpiece of cinema of any genre. It’s a film that touches us and causes us to examine ourselves and how we see the world.

And when I say this isn’t a science fiction film I mean it. There are no space ships or space travel. Yes it’s set on a space station and we see the planet below, but outside of that there is nothing. The trip to the space station is shown as a trip across a city. This is essential a fine chamber drama about a doomed romance where the characters try to get it right this time.

What haunts me about the film is it’s notion that despite our best efforts we are always going to be doomed to repeat the past. Watching Kelvin relive his time with his wife over and over and trying to fix the mistakes again is heart breaking, but it makes it clear how much we are creatures of habit.

I love this film. When I finally got to see the film, long before Criterion put it out on DVD I was blown away. This wasn’t quite the dark brooding incomprehensible film that many had told me it was. It was, and is a carefully nuanced film about people and heartbreak and hope.

Its a masterpiece that really should be seen by any film lover.

Tomorrow a look at the Steven Soderbergh remake/reinvention

(And yes this is a remake, there was a Soviet TV adaptation 4 years earlier)
Posted by Steve Kopian at April 06, 2013