Tribeca Day 2- A Change of plans, I meet the Bending Steel guys and Elaine Stritch (Revised) 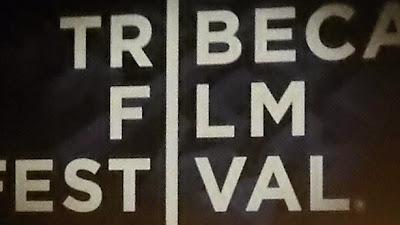 The screen over Elaine Strich's head during the Q&A
Another long day- and while I did get home earlier than last night its still after midnight before I write this down. As it stands now I'm 10 reviews behind. Perhaps I'll get a chance tomorrow or Sunday night to catch up...

A shout out to Kenji Fujishima who I saw to day at Frankenstein's Army. I am always a happy to see him at a screening since I invariably feel I've made the right choice.

Another shout out to Hubert Vigilla, the man of many hats, who has been my some time companion these last two days-thank you sir, its a blast as always.

And most importantly a huge thank you to Mondocurry who has been my email screener and pinch hitter- We have not connected at the festival yet, but I couldn't have gotten through these last two days without your help.

The day began with some of BIG MEN. his is a highly anticipated film about the nonsense around oil in Africa. Its rather blah and having seen films like DELTA BOYS  and THE AMBASSADOR there didn't seem to be anything new. (There ends my full review)

FRANKENSTEIN'S ARMY is a found footage retro horror film about a Soviet squad on patrol who encounter the mad doctor and his creations. A full review is required and will be coming, but know that when the film works, during most of the second half, its as good as a monster film as it can get. The flaw is the found footage format which frequently works against the film. Honestly had the film not been found footage I think it could have been argued it was one of the truly great monster films of all time. I'll explain shortly.

GORE VIDAL: UNITED SATES OF AMNESIA- is a wonderful look at the man and his life. If you are a fan of Vidal's way of telling it like it is it's manna from heaven. If you don't know the man it's a great place to start. Vidal is a hero of mine, and the film was a delight.

After this film I called Randi about the Elaine Stritch film and then headed down to the Press Lounge where I met Hubert.

After snagging some ice cream we headed out only to encounter the cast and crew of BENDING STEEL (the review is up tomorrow evening) which is one of the best films at Tribeca.  Going into full gush mode I told the guys how great their film was. I know I was getting looks from some of the other press, but to hell with them, if I can't go fanboy when I see some people who impressed the hell out of me then it's time to hang this all up. The Bending Steel crew have put together a great film and it's so nice I could tell them face to face.

I got to BLUEBIRD late which meant that I was in the front row. The bitch of it was that I couldn't escape the film which has great performances and some great scenes but seems to be missing about 40 minutes of material.

The plot of the film has school bus driver apparently leaving a student on a bus after getting distracted by a blue bird when she was checking the bus (I'msaying apparently because it doesn't make sense as shown). It spins out from there as so much trouble is heaped into the mix as to make it almost unbelievable and over done. The illogic of the film starts with the  basic premise-no one noticed the kid was gone? No one called the police? It spins out  in sequences that seem to have been cut from a longer better film. I could shred this film's script for hours but I won't. It's cliched inde crap at its worst...even if the performances are great and possibly Oscar worthy.

Mondocurry took on the job of seeing ADULT WORLD while I went off with John and Randi for a little bit before Randi and I went to see ELAINE STRITCH:  SHOOT ME.

Heading to the theater Randi noticed a commotion and saw the wonderful Ms Strich being mobbed as she got out of her cab (pictures will follow) I then watched as the great one walked the red carpet and spoke with the press.

Inside before the movie Randi and I were talking when I heard a voice behind me. It was Ms Stritch coming in to be seated. I looked at her. She looked at me. Finally she asked me "Are you going to behave?" to which I replied "But thats no fun" She smiled and went off to her seat.

I will review the movie soon, but the short version is It's one of the best of Tribeca and the best of the year. This is a wonderful warts and all portrait of the lady. Good god is she wonderful. SEE THIS MOVIE.

After the movie there was a Q&A that was really a monologue. I'll try to write it up when I do the review.

Heading home Thomas Hayden Church was on the red carpet for WHITEWASH (a review in the morning). I snapped a few pictures before heading off to Penn Station.