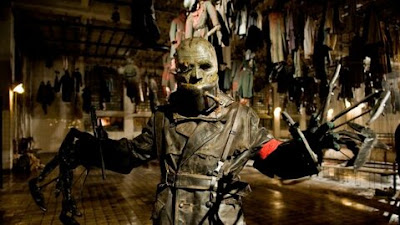 Found footage film involves a platoon of Soviet soldier during WW2 on a secret mission. Along the way they recieve a radio message about another group of soldiers pinned down. Going to help they find a mining village that is more or less deserted. It quickly transpires that a certain mad scientist is there and that he's making his own twisted army.

Frustratingly close to being one of the greatest monster movies ever made (and the monsters in the film kick serious ass) the film falls short because of it's found footage conciet. Nominally assembled from the footage their camera man shot the color film looks nothing like Soviet war footage from the era.  Worse the film occasionally does some weird things with what we see, including a late in the game statement of being on the last roll of film, which then runs for about a half hour of screen time. It makes no sense and keeps the film from being truly great...

...on the other hand the film is pretty damn close to being great and it is, in a weird way, one of my favorite of all the monster films I've ever seen (at least so says the 8 year old kid that lives in my heart). The monsters in this film are wicked cool, made of bodies and knives, and diving helmets and drills and saws and propellers and lord knows what else. In the hands of this Frankenstein anything is possible.

Equally wickedly cool are the Easter eggs that fill the film. From make up that echoes Hammer horror films, to steam punk versions of iconic movie images this film was clearly made by genre fans. Even if the film wasn't as good as it it I'd have to see the film again just to try and capture all of the references that seem to be sprinkled through out it.

I don't know what to say but this film is a blast and a half, and when it over comes the found footage handicap its one of the greatest monster films ever. (there I said it. You happy? I am)

Go see this film and when it comes out on DVD buy multiple copies to give to your friends.