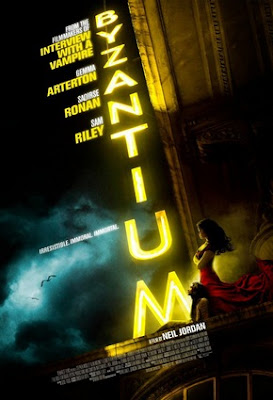 I could and would argue that Neil Jordan's Byzantium is one of the best vampire films of the last 15 years. I also don't think it would be  a stretch to double that length of time as well. I will freely admit that the opinion is my own, and I can accept challenges to it with a smile since the audience I saw the film  with was split as to its merits,

I will say this that the film is probably best seen knowing as little as possible, When I saw the film the ones who liked it the most had the least preconceived notions about it, indeed one person didn't even know going in that vampires were in the offing.

Simply put the film follows Eleanor and her mother,Clara, who looks young enough to be her sister, as they flee one home and search for another. It seems an old enemy has found them and they have to regroup. Coming upon a city Eleanor things they had been to before, they begin a series of encounters that will alter their lives...

Far from your typical vampire film (there are no fangs) the film takes its time setting up the two women and their world. This is a film where the stories bleed off the screen. There is clearly way more going on than we are seeing and the film is so much better for it. We are also so much better because the film builds the characters Not only are the women gloriously realized, so is everyone in the film. No one is just a throw away character.

What I loved about the film was that it takes some of what we have been taught about vampires and mixes it with a whole bunch of  stuff we never considered and which if you think about it makes perfect sense, I mean fangs look cool but they don't make any sense. I also love that the film doesn't try to explain anything at any point, rather the film tells us what we need when we need it and in a manner that makes sense.

Saoirse Ronan as Eleanor kicks serious ass. She is a woman of 206 trapped in the body of a 16 year old, Life has beaten her down. And while she may look and act 16 you know there is much much more there as in the chilling scene where  she explains that the only way to prove how old she is over time. Its so brilliantly done, the change from girl to oh so much older and wiser woman that knows how to put an adult in her place is scary.

I love this film a great deal. I love that it takes a worn old broken down genre and turns it into something wondrous. If you can throw all your notions of what a vampire film is out the window I think you'll see the magic of this masterful film. (Or to put it another way it was the film that Interview with a Vampire should have been)
Posted by Steve Kopian at April 15, 2013