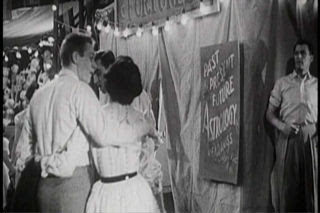 Steve McQueen’s first screen appearances occur about 2 minutes into the film where we see him using a strength tester and then again about 18 minutes in when he and his girl wander through the carnival setting and the camera follows him. Say what you will, but it’s clear the camera loves him and he stands out from the first instant.

The convoluted plot of this kind of film noir has a reporter and his girl on the lam at the carnival where the reporters boss was killed. Everyone thinks the reporter did it, but he didn’t. As the couple try to work out who the killer is the cops swarm all over fairgrounds.

Shot on sets and with shot choices similar to contemporary TV shows than a feature film, this film feels like one of the anthology TV shows of the period but stretched to 65 minutes. Actually it’s not so much stretched as grafted onto footage of various women dancing in the burlesque tent.

And there is a good deal of dancing, probably half of the film is not more are the girls dancing in the tent or outside it. It’s amusing at first but after a while it gets repetitive with all the gyrations looking the same.

As for the mystery or crime drama, it’s actually not bad. It could have used some beefing up since there are several times where people explain what happened off screen before the movie started. If the movie had been smart it would have shown us everything instead of telling it to us. Its not bad but it really should have been better.

Do I recommend the film?

If you see it with something else (it’s in a Weird Film Noir set from Image) or on TV since it does show up on TCM.

Speaking of the Image set one of the other films on the set is the really weird film The Naked Road. This little mind bender has a couple stopped for speeding and brought into night court. Since the man doesn’t have the 100 bucks to pay the fine, he leaves his girlfriend as collateral while he gets the money (no really). While he’s away another guy pays the judge to release her and they go off to dinner together where he drugs her and then takes her away to convince her to become a hooker. Told in long static shots this film is a supreme head scratcher. You’ll keep wondering what they were thinking. After the first couple of minutes nothing happens other than lots of talk.

I can’t recommend the film unless you’re a bad film fan, but if you like head scratchers give it ago.
Posted by Steve Kopian at April 05, 2013