This is the second part of our look at the films playing at this years Kino series at the Museum of Modern Art. Part one ran yesterday and be found here. 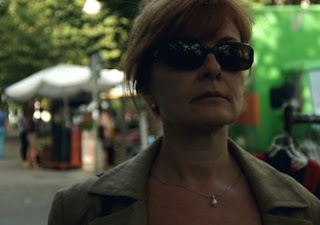 SILVI- MAYBE  LOVE
Lina Wendel star as Silvi. She's a 47 year old woman who's marriage suddenly disintegrates and she's left to figure out which way to go. Focusing on her search for love, sex and companionship the film follows as Silvi moves from man to man as she tries to balance what her partners want with what she wants and her own growing sense of self.

Easy to describe but much harder explain, at least briefly this is film that's another in a long line of films such as An Unmarried Woman where we get to see a middle aged woman flower. While the film is in a genre that has been well  traveled over the last few decades, Silvi scores in two areas, first the film is quite honest and frank in it's discussion of sex.Silvi explores what American films would probably consider the kinkier side of things (there is bondage and sex toys). Its a wonderful change from most films of this sort since the characters behave like adults in all their wide range.

Secondly the film has Wendel in the lead. She's a likable lady who is trying to find herself in her unexpected and unasked for freedom. If the film manages to stay out of the well worn rut of similar films it is because of Wendel who give a magnificent performance as a woman of a certain age who isn't going to stop until she finds happiness. God bless her and this film.


The  next two short films are playing in a double feature: 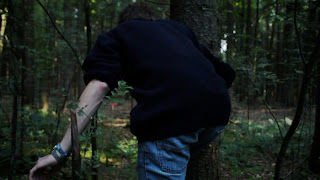 DIE WIEDERGAENGER (THE REVENANTS)
The publicity material describes the film as follows:
Northern Germany.
An ageing hippie couple endures an isolated, ghostly existence in an old country house.
A boy wanders aimlessly through a forest, building a lair for himself.
And a story about a never-ending escape from catastrophe.

The Revenants - a film about desire, loss, and endlessly returning.
A ghost story.

I would call it mind bogglingly dull. This is a 62 minute film made up of what seems to be primarily of static landscape shots for much of the first half. The film then shifts away from that in the second half with moving  shots, some music and narration. I have no idea what any of it means. Frankly by the fifteen minute mark I was squirming in my seat and wondering if this was going anywhere, it kind of does but where ever it ends up it really doesn't seem like it was worth the effort. Give the film points for trying to be something other than conventional, but take a few away for not being all that interesting.

I have almost nothing else to say about the film other than if you can make it through the film without nodding off you're a better person than me. 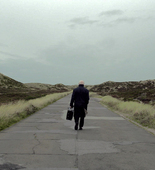 KALOFORNIA
Pavel  packs up his bag and heads off to California. Along the way he meets various people.

Form over content film is either going to strike you as off beat and charming, or as a film that's off beat and in need of fleshing out. I like the film, but I don't love it, mostly because this seems to be a film that is exactly the wrong length. Much of this could be fleshed out and some of it could be shortened. Somewhere there is a better version of this film that is more than just quirkiness and silences ( What do I mean by quirkiness? Pavel lives in a trailer in a country and he had a rotary phone that isn't connected to anything). The film is mostly Pavel's collision with the world after a long time away from it and to me I wish there was more to go on (This film is only 26 minutes) and I'm pretty sure that had this been feature length I would have loved it instead of begrudgingly liked it for the bits.

In the films favor I will say that my patience was not in the best condition. I watched this after seeing the above film Revenants so my willingness to go with the film was in short supply. That said, while I like the film, and admire the technique, I still don't think it adds up to much.
Posted by Steve Kopian at April 14, 2013