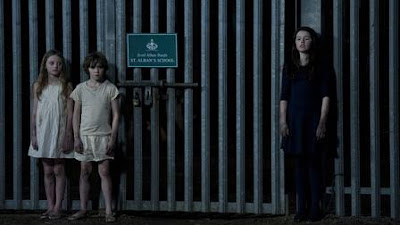 One of the best nights at Tribeca was standing around after this screening talking to Mondocurry, Peter Guitterez, Chris Bourne from Twitch and Hubert Vigilla from Flixist discussing, very loudly, this film. This is a divisive a film, and  as you will find as you talk to people about the film opinions will fall everywhere. If you want to get a handle on this film, do yourself a favor and read every review you can because everyone will say something different. (See Below for links)

That said, while I like the premise of the film, I hate the execution. yes it's largely technically great, but either the script was botched to start or it was wrecked in the editing and this is a horror film that had me laughing for all the wrong reasons.

The plot of the film has young Neve being complaining about things moving in her house. When the objects in the house attack and kill her parents, no one believes her. She is taken in by friends of her parents and it isn't long before it all starts again.

The dark reasonings behind it all- Neve was being abused by her parents and she has developed psychic abilities, is on the face of it pretty good. Sadly the director admits to cribbing bits from Carrie so you kind of know where this is going. (In the press notes the director also explains a couple of things that the film doesn't. I shouldn't understand a film better because press notes tell me whats going on. If thats the only way the film works its a failure. Also a failure is the spelling of Neve's name which changes in the notes, the film and elsewhere.)

I took something like ten pages of notes for this film ripping it apart from stem to stern. I think its a mess as presented here, with the opening bits of the death of Neve's parents so confused that you really can't understand whats going on . It could be argued that it's being shown from Neve's point of view except we see things she'd never know. Once her parents are killed, in a silly scene that had me literally biting my hand so I wouldn't scream with laughter, the house catches fire and burns down, kind of....when the police and fire department arrive the house  and furniture is largely unburnt despite talk of heavy smoke and fire damage. Honestly the house looks pretty good to me.

After that things make less sense as Neve and her foster parents clash. Over what I don't know. This produces occurrences which are clearly psychic or demonic or something other than rationally explained, and yet everyone in the film tries to explain it through rational means- despite seeing clearly things are not rational. I've never seen anyone in a horror film as stupid as the people here.(No really-no one has ever been this stupid)

I won't go into more details, however I will say little of it makes any sense and by the time the film ends you may end up like me and writing WTF was that over and over again.

The cast is game, the effects good, the basic plot is rock solid, the trouble is the director/writer made things so way out that the film is more funny (for all the wrong reasons) than scary...unfortunately the darkness in the whole child abuse angle takes this film out of contention for being a good bad film because it's too dark to laugh at it.

The first truly bad film of the year, this was at the time I saw it the worst film at Tribeca.

Of course your mileage will vary-and odds are it will since everyone I've talked to about this film has a different take.