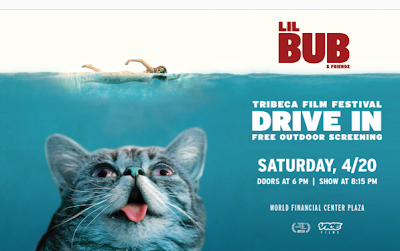 This is an amusing 65 minute look at Bub, other Internet cats, meme's and people making a buck from pictures from their cats. If you love cute things this film is for you.

There are two ways of looking at this:

If you don't like or don't care about cat videos then this is a very messy, slightly disorganized film that doesn't know what it's about. Covering too much material in too short a time the film is little more than a series of puff pieces blown up to feature length. Yes the cats are cute but it doesn't really say much of anything except cat lovers can be compared to serial killers (I'm not making that up).

If you do like cat videos then you'll have a great time looking at cute cats and people talking about cats. If you've ever wanted to see You Tube Cat videos on a big screen you'll be in heaven. Its wonderfully like a bunch of You Tube videos with just a bit more substance.

Ultimately this isn't a deep meaningful film, it's a film about cute cats and the crazy people who love them.

I liked the film, but wish there had been an editor and not an assembler. The film really is a collection of bits that are kind of connected by Bub's story.  That said I still had a good time. If you like cats you will too.

And in the interest of full disclosure I present a warning: this film contains language of a possible onjectionable nature

While this is kind of almost a perfect family film it comes with one possible drawback: There is a great deal of profanity in one part of it. I'm not talking hell or damn but shit and fuck (lots of them). Its around the sequence on marketing that the film goes from G or PG to R rated purely for the number of times certain words are used. I personally don't care but I know some parents who do and I can't in good conscious recommend the film to them even though I know their kids would love it. Because the language is only in one sequence I noticed that it was there simply because the words are not heard anywhere else in the film. I wouldn't have said anything except that as you can see by the ad which I stole from the Tribeca Tumblr is going to be shown at a family event.If you don't mind the language do take the kids.

ADDENDUM: After writing the review I spoke with Juliette Eisner producer of the film. I was told that the film was not put together with any audience in mind and that it was out together as they thought best with no thought of the language. Julie said  that the attention and size of the screenings its getting at Tribeca happily shocked them.
Posted by Steve Kopian at April 18, 2013